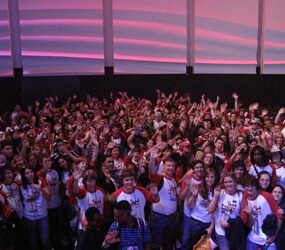 KANSAS CITY, Mo. – William Gordon had never been on a plane.

If one thing was going to cause the 15-year-old to take the leap, though, it was the biennial National Catholic Youth Conference.

The St. Peter Claver parishioner from Baltimore had no fear as he boarded the flight to Kansas City, Mo., Nov. 19. The next morning, as he walked toward the Sprint Center arena to join 21,000 young Catholics for a general session of song and adoration of the Blessed Sacrament, he wore a broad smile.

An hour later, the Sprint Center was silent. Thousands were kneeling in unison as the Blessed Sacrament was placed on an altar. Some were overcome with emotion as tears streamed down their cheeks.

“I’ve got to say it was life-changing,” said Zanna Poquette, 16, a parishioner of St. John the Evangelist in Severna Park. “Oh my goodness!”

There were many Archdiocese of Baltimore lives altered Nov. 19 to 21, as the delegation experienced the theme “Christ Reigns.”

NCYC brought together dioceses from across the country for song, worship and workshops.

The crowds were so big that the general session gatherings had to be carried out in two different locations at the same time. While the Sprint Center was filled to capacity, another 3-4,000 people watched in real time on large screens from the Grand Ballroom of the Kansas City Convention Center.

Steve Bechtel, a parishioner of St. Ann in Hagerstown, turned 18 during the trip. Rather than celebrating the milestone at home with friends, he wanted to be with fellow Catholic teens.

“I really like attending these youth conferences,” Bechtel said. “It’s such a great affirmation of your faith. For me, it’s the experience of seeing all those people here. We are one church. We might be so big we’re in two places, but we’re one church.”

Some of the country’s biggest Christian music stars – like Matt Maher – performed throughout the three days. Maher’s Nov. 20 set sent the packed crowd at Sprint Center into a frenzy. He was their Bono.

Parishioners from St. Ignatius, Hickory, sang alongside those from St. Louis, Clarksville.

Attending NCYC took a certain amount of fearlessness. Teenagers are often cited for their self-consciousness. As they walked the streets of Kansas City, thousands wore Catholicism on their sleeves as they donned humorous, hometown-identifying crab hats.

It could often be confusing, however, as the teens participated in trades. By the end of the weekend, someone from Wisconsin could be wearing a crab hat, while someone from Baltimore had one with a cow.

“You don’t seem foolish because everyone else is doing it,” William said.

Back home, many parishes were thinking about their teens. During Saturday Mass at St. John the Evangelist, Hydes, its youth contingent called worshippers and shared their excitement.

Much of the NCYC event was held in the convention center, where teens attended workshops on faith, catechism and daily issues facing their lives. A 191-sqaure-foot thematic park called “The Reign Forest” featured exhibits hosted by music companies as well as orders of priests, sisters and brothers. While one corner of the “park” featured interactive sports, another offered the sacrament of reconciliation for teens.

Both the arena and the convention hosted closing Masses, which were celebrated by bishops from across the country. Although the thousands attending NCYC were separated by city blocks, they were connected by their faith.

“All young people have a divine spark within them,” said Kristin Witte, coordinator of pastoral care for the archdiocese’s Division of Youth and Young Adult Ministry. “Returning to the archdiocese, the young people who attended are exhausted and need a good night’s sleep, but once refreshed, they will be desperate to share their love of Jesus Christ with their parishes and schools. They are fired up to lead. Our responsibility as the church to which they are returning is to tend to and nurture that fire.”