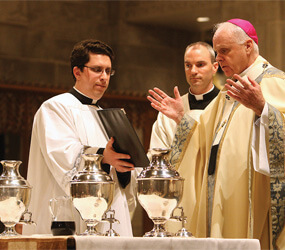 In a public display of their unity with one another and with Archbishop Edwin F. O’Brien, 235 priests from every corner of the archdiocese renewed their priestly promises during the annual Chrism Mass at the Cathedral of Mary Our Queen in Homeland April 6.

Standing as a group before Archbishop O’Brien, the priests pledged to renew their dedication to Christ, to be faithful ministers and to aspire to become more like Christ by “joyfully sacrificing” their own pleasure and ambition to bring Christ’s peace and love to others.

During the solemn liturgy, Archbishop O’Brien followed ancient tradition in consecrating the chrism oil and blessing other oils that the bishops and clergy will use in their ministry throughout the year.

The chrism will be used to anoint the newly baptized, seal candidates for confirmation and anoint the hands of priests and the heads of bishops at their ordination, as well as in the rites of anointing at the dedication of churches and altars.

The oil of catechumens will be used in the preparation of the catechumens for their baptism and the oil of the sick will bring comfort to those who are ill.

In his homily, Archbishop O’Brien hailed the assembled priests for their dedication and selfless service.

“I take the opportunity along with all you faithful gathered here, to thank all our priests for their day-in, day-out service of love, on your behalf, in the name and person of Jesus Christ,” Archbishop O’Brien said. “You, my brothers, have been particularly generous both in welcoming me as your bishop and in your counsel and collaboration as we seek together to build up the Church, Christ’s body.”

Archbishop O’Brien drew attention to the recent Lenten campaign promoting the Sacrament of Reconciliation. As part of the effort, priests heard confessions at every church of the archdiocese on the Wednesdays of Lent.

“Who can begin to count the number of souls unburdened from sin through your words of absolution,” he said.

The archbishop called it a “unique experience and singular grace” for priests to be the voice of Christ in extending forgiveness.

“It is my fervent prayer that many young men will come to share with us that joy as priests of Jesus Christ,” he said.

Three times during the liturgy, the estimated 1,000 people in attendance applauded their clergy: once as the priests processed in with 67 deacons and more than 20 seminarians and twice at the end of the celebration when Archbishop O’Brien highlighted the service of retired priests and of all priests.

Emma Eaton attended the Chrism Mass as a way of preparing for Holy Week and showing support for priests. She was joined by a group of religious education leaders, catechumens and candidates from St. Anthony, Emmitsburg; Our Lady of Mount Carmel, Thurmont and St. Joseph, Emmitsburg.

“It’s hard these days being a priest,” Ms. Eaton said. “They don’t get the support in our society that they did formerly. It’s always taken courage to be a priest, but I think it takes more today.”

Monsignor Joseph Lizor, pastor of St. Luke in Edgemere, called the Chrism Mass “one of the biggest times of the year to see all the priests together.”

“We all have our own parishes and other work, so we hardly ever get to see everyone all together,” he said. “This is a great day – a great day.”

Asked what it was like for priests to hear the supportive applause of Catholics, Monsignor Lizor said: “It makes us humble.”

“It’s really great to see the camaraderie,” he said. “It’s a great time to work together. It’s a special day and a special week.”

Father Kevin Mueller, pastor of Church of the Holy Apostles in Gambrills, said he was grateful for the chance to be present with other priests at the Chrism Mass.

“I feel really close to my brother priests,” said Father Mueller, noting that many priests – including some he didn’t know very well – supported him when his father recently died.