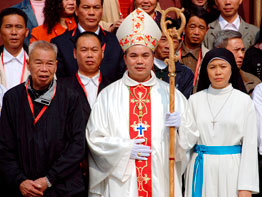 HONG KONG – Several Chinese bishops interviewed by an Asian church news agency expressed concern about the “government of dioceses,” an item the Vatican said was recently discussed at a meeting of a special church commission on China.

“I understand the importance of normal diocesan management,” said Bishop Joseph Wei Jingyi of Qiqihar, in northeastern China. However, the bishop, who has refused to register with the Chinese government, told UCA News that restrictions on religious activities often make pastoral work inconvenient.

Bishop Anthony Dang Mingyan of Xi’an cited religious formation as a key issue in how dioceses are run. He told UCA News that “each member of the church should be conscious of his or her responsibility and mission of spreading the Gospel.”

In 2006 his diocese established pastoral, economic and vocations committees, which he said “have operated on track and have eased my workload.”

The three bishops were among Catholic leaders from mainland China who reflected on their experience and perception of the church in light of a statement the Vatican released after the first meeting of its recently established commission on China.

The statement distributed to journalists March 13, a day after the end of the three-day meeting, said the commission considered “certain important aspects regarding the church’s mission as the ‘instrument of salvation’ for the Chinese people.” These general topics were seen as the basis of discussion by the commission, which did not include any bishops from mainland China.

In particular those issues included:

– Evangelization in a globalized world.

– How to apply the Second Vatican Council’s doctrine on the nature and structure of the church in China’s current situation.

– Forgiveness and reconciliation between the divided Catholic communities.

– What truth and charity require.

– The governance of dioceses, “which has great relevance for pastoral activity and for the formation of priests, seminarians, religious and lay faithful.”

Bishop Feng said many Chinese, despite being better off materially than in the past, still experience spiritual emptiness, since they have not heard the Gospel.

“This is an opportunity for evangelization. The church has to enter society and take part in charity and welfare work,” he said.

Regarding the Second Vatican Council, a priest who asked that he be identified only as Father John noted that the Chinese Catholic Church was isolated from the universal church from the late 1950s until religious activities revived in the early 1980s.

“How many of our clergy, let alone laypeople, really understand the spirit of Vatican II?” he asked.

“We have not gotten any concrete instruction on how to achieve reconciliation,” the priest said.

In a 55-page letter to Chinese Catholics released in June 2007, Pope Benedict established guidelines to favor cooperation between unregistered Catholic communities and those officially registered with China’s communist government. The government requires the registration of bishops and church communities and uses this as a tool for control; some Catholics view registration as a serious compromise and prefer to exercise the faith in a semiclandestine manner.

The pope gave several practical guidelines aimed at bridging the gap between China’s Catholic communities. On perhaps the most crucial question – whether local churches should register with the government – he outlined a margin of flexibility that went far beyond previous Vatican statements, in effect leaving it up to the judgment of the local bishop. He also answered a question that surfaces at the grass-roots level of the church in China when he encouraged lay faithful to participate in Masses and sacraments carried out by government-registered bishops and priests, as long as they are in communion with Rome.

Bishop Feng told UCA News the registered Catholics in his diocese made progress in reconciling with unregistered clergy and laypeople last year after the papal letter was issued.

Bishop Dang said priests need to be more broad-minded so as to improve communication among themselves and achieve unity between the two church communities.

Bishop Wei said some of the Catholics in his diocese have not done enough for charity.

“Now we should put aside disputes and move toward true reconciliation. We should learn from Jesus and the Gospel spirit to return good for evil,” he said.

The mainland Catholic leaders also shared their expectations of the China commission, which includes Vatican officials “competent in the matter of China”; church leaders from Hong Kong, Macau and Taiwan; and the heads of several religious orders with expertise in China.

Bishop Wei said he hoped the commission would work out of a genuine understanding of the church in China, whose primary task he identified as continuous formation for mainland clergy, religious and laity.

Father John also said commission members’ understanding of the church in China should be more comprehensive than merely understanding the registered and unregistered church structures, because situations vary from place to place.