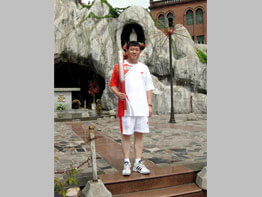 TANGSHAN, China – A Chinese Catholic bishop said the local church’s engagement in society has enabled him to carry the Olympic torch on its way to Beijing.

Coadjutor Bishop Peter Fang Jianping of Tangshan, 45, represented the Catholic Church in Tangshan during the July 31 torch relay in Tangshan, a city about 110 miles east of Beijing, the capital.

Bishop Fang told the Asian church news agency UCA News Aug. 1 that he was invited to run because the Chinese government has made progress in recent years in carrying out its religious policies and in expressing concerns over religious issues to religious leaders.

The local church’s active participation in social affairs also has garnered the appreciation of the government and public, he told UCA News.

“Because of the church’s contribution to the society, I was named a torchbearer,” he said.

Bishop Fang noted that the Diocese of Tangshan donated money and materials worth $22,000 to the quake-stricken area in Sichuan province through the local religious department and charity bodies.

Bishop Fang told UCA News that many local Catholics who saw the live TV broadcast of the relay told him they were overjoyed to see their bishop taking part in the event.

Torchbearers are allowed keep the torch as a souvenir after their run, but some have sold or donated it. Bishop Fang said he will keep this “precious spiritual legacy.”

The bishop, a Hebei native, was ordained a priest in 1989. He was ordained a bishop in Beijing Jan. 6, 2000, without papal approval. In 2002, the Holy See legitimized his episcopal status. He has worked with 89-year-old Bishop John Liu Jinghe of Tangshan, and has been a deputy of the National People’s Congress, China’s parliament, since last March.

Imam Han Shujun, president of the Tangshan Islam Association, was the 42nd torchbearer. The Rev. Jin Yunpeng, chair of the Hebei Protestant Church’s Three-Self Patriotic Movement Committee, was the 161st torchbearer. Both are members of the provincial People’s Political Consultative Conference.

In late June Father Paul Meng Ningyou, vicar general of the Diocese of Taiyuan, took part in the torch relay in Taiyuan city, the capital of Shanxi province.