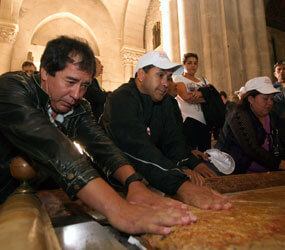 JERUSALEM – Despite the overwhelming media attention they received and heated debate over the purpose of their visit, 25 Chilean miners who arrived in Israel in late February said theirs was a visit of thanksgiving.

“We want to thank God for all that he did for us. Our faith and hope were fundamental for our survival,” said Mario Gomez, the oldest of the 33 miners trapped for more than two months underground while dramatic rescue efforts attracted worldwide attention.

“It was a miracle,” Gomez said of his rescue; he was 63 at the time. “There is one being who could achieve that, and that is God. He gave us a second life. When we exited the capsule, we returned to being ourselves.”

The miners said they were eager to see the Church of the Holy Sepulcher, the Via Dolorosa – the traditional route of Jesus’ Way of the Cross – and the Western Wall among other religious and historic sites.

Richard Villarroel and his wife, Dana Castro, brought along their 4-month-old-son, Richard, born six days after the rescue.

“We prayed every day. I lost count of the numbers of Hail Marys and Our Fathers we said,” said Villarroel, who carried his son in a baby carrier on his chest. Young Richard was covered with a Jewish prayer shawl to protect him from the sun as they walked on the Via Dolorosa surrounded by cameras.

Maintaining a vigil above ground during the rescue, Castro said she was strengthened by the power of the Holy Spirit, whose presence she felt.

“Now I want to give thanks to God and his son who was here. I want to have some quiet and talk to them. Now we are all three here,” she said.

Since their rescue the miners have been special guests at various sites, including Disney World and England, where they met the Manchester United soccer team.

The miners were given a hero’s welcome by Israel. Other sites planned for their tour were Yad Vashem Holocaust Memorial, the Mount of Olives, Galilee, the Dead Sea, Nazareth, and Tel Aviv.

The miners received an equally warm welcome from shopkeepers and pedestrians in the West Bank city of Bethlehem Feb. 26, as they walked through the market. A representative of the Palestinian Ministry of Tourism greeted them on their arrival and a Chilean Franciscan monk guided them through the Church of the Nativity.

Despite Israeli claims to the contrary, some Palestinian nongovernmental groups accused Israel of extending the invitation as a public relations stunt at the expense of the miners.

While admitting that the visit was an opportunity to show Israel in a positive light, Minister of Tourism Stas Misezhnikov said the visit was a tribute “above all to the triumph of the human spirit.”

“We are a country born into challenges and struggles and continue this struggle for 63 years. We admire this group who fought for their lives with clarity and human spirit while underground,” he said in response to a journalist’s question Feb. 23.

“So this is part of the visit to bring them to the Holy Land so they can thank their God for the rescue and we can show them how much we respect and appreciate their human strength,” he added.

The miners said the trip was purely a pilgrimage of thanksgiving and they did not want to be entangled in politics.

“We are neutral,” said Franklin Lobos, 53, a former professional soccer player who was the 27th miner to be rescued. He had been working in the mine only four months when it caved in. “I can’t assume to get into the politics here. More than anything this is a pilgrimage to see the holy sites. I hope it will not be used for any political purpose. All the trips have been nice, but this is the most beautiful.”