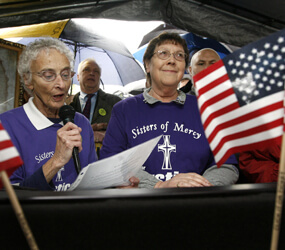 The sisters, and several dozen allies, including other religious leaders, planned to block the driveway of the Broadview Immigrant Detention Center on that day, to protest the lack of access pastoral care workers have to immigrants in the center.

But because of a last-minute decision by Ricardo A. Wong, field office director in Chicago for Immigration and Customs Enforcement, the sisters and other leaders were celebrating instead.

After an April 28 meeting, Wong announced that pastoral care workers would be allowed to visit people who are about to be deported on the buses before they leave Broadview each Friday morning. The change was to last for a two-month trial period, while negotiations for greater access to detainees continue.

The processing center is the first place detained immigrants are brought after being arrested and the last place they go before they are deported. More than 11,000 immigrants have been deported from Broadview, 13 miles west of downtown Chicago, during the last year.

Detainees include both documented and undocumented immigrants, many of whom have lived in the United States for years; torture survivors; asylum seekers; and vulnerable populations such as children, pregnant women and people with chronic illnesses who may not have access to adequate medical care while they are in detention.

“It’s a small step,” Sister Jo Ann said in a May 1 phone interview, hours after boarding the buses outside the detention center.

On that morning, the sisters said, there were three vehicles leaving the center for O’Hare International Airport: a large bus; a smaller bus, similar to shuttle buses used by hotels; and a minivan.

“They were crying and trying to embrace us,” Sister Jo Ann said. “One of them gave us her (U.S.) address and asked us to visit her family. She has a husband and two children here.”

Another worker, a minister from the United Church of Christ, was able to speak with some of the men through a back door that was opened to allow communication.

“We tell them who we are, and that there are people who care about them, and that we will be with them in spirit on their journey,” Sister Jo Ann said. “Then we say a prayer with them.”

The ICE employees on the buses were very cooperative, she added. “One said to me, ‘God bless you for what you are doing,’“ she said.

The two Mercy sisters have led prayer vigils for the immigrants in the center, often joined by the immigrants’ families, every Friday morning for the last two and a half years. They also spearheaded a successful effort to get a law in Illinois requiring county jails that house immigrant detainees to give access to pastoral care workers.

That law goes into effect this summer. In the meantime, the sisters continue to visit detainees being held in the McHenry County Jail in Woodstock once every two weeks. Some of the deportees the sisters saw on the buses recognized them from their visits to Woodstock, Sister Jo Ann said.

Following the April 30 prayer service, Wong took a delegation of six people on a brief tour of Broadview facility, but Sister Jo Ann said they were not allowed to come in contact with any of the detainees.