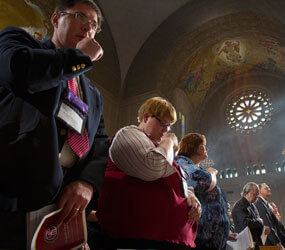 WASHINGTON – One hundred years and a day after the founding of the national organization that became Catholic Charities USA, its president called for “21st-century solutions to 21st-century problems” and said keeping track of how many people are fed or given shelter for a night is no longer enough.

“We need to track not only money and services, but how many people have escaped the need for such services,” said Father Larry Snyder, a priest of the Archdiocese of St. Paul and Minneapolis who has been president and CEO of Catholic Charities USA since 2005.

Father Snyder spoke Sept. 26 at his organization’s centennial gathering in Washington, where it was founded by about 400 Catholic leaders in 1910.

The conference opened the day before with a Mass at the Basilica of the National Shrine of the Immaculate Conception and a group photo on the campus of The Catholic University of America, mimicking a photo of the founding members 100 years ago.

Father Snyder acknowledged that “there will always be those who need the safety net” of services such as food, shelter or financial assistance, but said that for many, “the safety net is broken.”

“It can trap families into a lifetime of need,” he said. “Our efforts must be transformative” and must help place individuals and families on “the pathway to self-sufficiency,” he added.

Outlining the history of the organization founded as the National Conference of Catholic Charities, Father Snyder said it was established “at a time of great social transformation,” when the United States was moving from an agrarian to an industrial economy.

“But the progress came at a cost,” he added, including “a loss of recognition of the importance of human beings and a national sense of community.”

The church brought its “rich tradition of social teachings” to the U.S. culture and left its “fingerprint on some of the great social solutions of our day,” such as Social Security and various programs to fight poverty, he said.

“The conditions facing those we serve today are strikingly similar to those of 1910,” Father Snyder said, noting that the number of Americans living in poverty increased by more than 4 million in the past two years.

He criticized current attitudes of “intolerance, division and a lack of compassion for the ‘undeserving poor,’“ and said they are based on “a refusal to see in the faces of the poor the image and likeness of God.”

“No matter how well disguised, we must still see the beauty of the image and likeness of God in each person,” he added.

Father Snyder said those involved in the work of Catholic Charities must be “immersed in the messiness of life” and said now is “not the time for us to be timid about our faith.”

Like 100 years ago, “the age of visionaries and giants is still upon us,” he said.

Janet Lawson, director of Ford Volunteer Corps, part of the philanthropic arm of Ford Motor Co., said the organization, funded from Ford profits, has had to make do with a diminished budget to meet increasing needs, especially in the Detroit area.

Among the organization’s priorities have been mobile food pantries that can go quickly to where there is the most need and “economic stability” programs that provide financial basics and job training in “alternatives to the manufacturing jobs that have gone overseas.”

Father J. Bryan Hehir, professor of religion and public life at the Kennedy School of Government at Harvard University, said that although pundits disagree about how to end the current economic crisis, “there is general agreement that it will not end quickly.”

He said Catholic Charities’ “commitment to professional excellence, combined with hope and faith, give us the capacity to be the long-distance runner.”

Father Hehir, who is also secretary for social concerns and president of Catholic Charities in the Archdiocese of Boston, said the organization is “uniquely placed to contribute” to discussions about how the government distributes public resources.

“There is no substitute for the moral vision of leaders” in helping to ensure “the quality of life of all its citizens,” he said.

Joshua DuBois, executive director of the White House Office of Faith-Based and Neighborhood Partnerships, said the government can “learn a lot from Catholic Charities offices around the country,” especially their emphasis on “integral human development, as well as emotional and spiritual support” for their clients.

Asked in a question-and-answer period about how to promote civility in the national dialogue, DuBois noted a “connection between civility and poverty.”

“If the public debate has deteriorated to the point that we can’t see ourselves in another person,” there is little way to solve national problems together, he said.