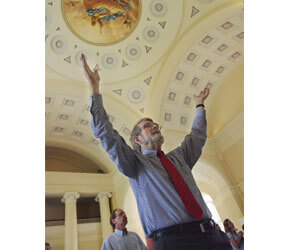 Dan Taibi is not prone to emotion.

That all changed May 31 during the Charismatic Renewal Center’s Pentecost Prayer Meeting at the Basilica of the National Shrine of the Assumption of the Blessed Virgin Mary in Baltimore.

Standing amidst hundreds of people moved by the Holy Spirit, the 28-year-old Taibi could not control the tears flowing down his cheeks.

“This was one of the most incredible experiences of my life,” Taibi said. “I was crying because I was encountering God’s love, which is real and powerful.”

Taibi and many attending the Pentecost Sunday gathering said the Holy Spirit was present among them as they sang and prayed. Some were so moved that they spoke in tongues and read Scripture passages. Many closed their eyes and waved their hands during songs, inviting the Holy Spirit to be with them.

Their goal was to bring a renewal of faith to the Catholic Church.

The meeting brought together members of prayer groups in the charismatic tradition from around the Archdiocese of Baltimore. The renewal movement began in 1967 on college campuses and spread to the general public. It espouses personal commitment to God, fruitfulness in prayer and Scripture reading through the power of the Holy Spirit.

Father Jeffrey S. Dauses, rector of the basilica, was chosen by Archbishop Edwin F. O’Brien to serve as the liaison to the Charismatic movement. Although he is not a practicing charismatic, Father Dauses told attendees during a welcoming address that their prayer groups were renowned for their giving spirit.

“You all are the ones who give your prayers, your support and your service,” Father Dauses said. “Your ministry is an incredible blessing.”

He then helped the crowd renew their confirmation and blessed them with holy water.

Dr. Robert and Julie Sawyer, chosen by the archbishop to be associate liaisons for the charismatic movement, helped guide the gathering.

Dr. Sawyer added that the church and Christianity can be renewed through dialogue and working together.

As the meeting concluded, Father Dauses led the crowd in eucharistic adoration. Those in attendance began singing “Oh Come Let Us Adore Him.”

Taibi, who has been discerning the priesthood while working in medical sales, said he wants to take the good feelings of the day to the masses.

“I believe the Holy Spirit is doing something today,” he said, “to renew this (church) in a powerful way.”