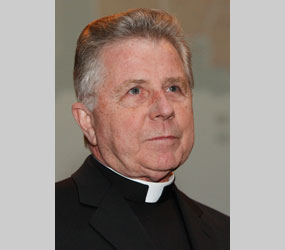 WASHINGTON – Nine years ago, Father Daniel P. Coughlin was two weeks into his job as chaplain of the U.S. House of Representatives when he figured out how he was going to do his job on Capitol Hill.

The priest from the Chicago Archdiocese began his job in March 2000 under some controversy when then-House Speaker Dennis Hastert, R-Ill., was accused of being anti-Catholic because he initially chose a Presbyterian minister for the job. A man who came up to Father Coughlin wanted to know what the new chaplain was going to do to put the “fracas,” as he called it, aside.

Trying to be diplomatic, Father Coughlin told the man he was looking to the future and the controversy was in the past. “I told him two weeks ago I was a nobody working in Chicago,” the priest recalled.

“That’s it,” the man told Father Coughlin. “You’re a nobody and you came here to tell anybody that there is somebody who has grace and healing for everybody.”

The man turned and disappeared into a crowd of tourists. “I swear he was an angel,” Father Coughlin told an audience of 50 during a program called “Faith on the Hill” at the Georgetown University Law Center near Capitol Hill March 2. “But that has been my attitude.”

Father Coughlin joined Barry C. Black, a Seventh-day Adventist who is chaplain to the U.S. Senate, in discussing their work among the hundreds of representatives, their families and their staffs as well as visitors to the U.S. Capitol in a program moderated by Michael Goldman, Jewish campus minister at the law center.

Since joining the House Father Coughlin said he has not let cynicism creep into his work despite hearing deep-seated feelings of skepticism and pessimism toward Congress when he talks with average people whose views come primarily from what they hear in the media.

Both men said they repeatedly see how faith guides the work of many elected officials as they seek to solve some of the most pressing issues the country is facing. Both chaplains also said they often are called upon for advice and counsel before votes are cast on some of these major issues.

“I think there’s a lot more faith on the hill than the media carries,” Father Coughlin said. “I’m happy with that because I’m not sure all the media knows how to talk about religion without making it seem a little silly or putting it on the edge of things.”

Mr. Black, a retired rear admiral in the U.S. Navy, leads five Bible study groups a week. Divided into sessions for senators, their families and their staff, Mr. Black said the gatherings help people remain grounded in something other than what they hear from the media, lobbyists and corporate interests.

He also conducts a 10-week spiritual mentoring class for individuals chosen from the Bible study groups to help them learn the spiritual disciplines of prayer and ethics.

Mr. Black described his job as helping senators understand the ethical and moral dimensions of their votes.

“The best of the senators have the ability to not make a false dichotomy between the religious and the secular,” he explained.

Father Coughlin said some of the most serious discussions he has had with House members came in 2003 during the debate to authorize the U.S. war in Iraq and in February as President Barack Obama’s economic stimulus package was being considered.

In response to a question from Mr. Goldman, Father Coughlin said the debates within the Catholic Church over withholding Holy Communion from public officials whose votes may be perceived as being against church teaching were “very upsetting.”

Mr. Black said theological issues do not separate the views of officials as much as philosophical views on the role of government in people’s lives.

“I’ve discovered in terms of theology that most people have enough in common doctrinally that they can get along,” he said. “Where there are differences, I don’t think usually the theological differences are the ones that are going to be dominant. There will always be differences as long as you’re debating two sides of an issue.”