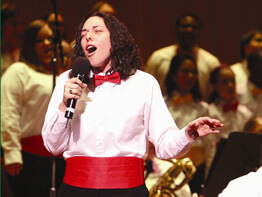 On April 9, some 350 students from about 50 Catholic schools in the archdiocese awed and entertained more than 1,500 guests during the third biennial Celebration of the Arts.

“No words can describe the talent of these young people,” said Dr. Ronald Valenti, superintendent of Catholic schools.

Marella Torsella, a student from The Catholic High School of Baltimore, belted “Jesus, Give Us Your Peace” as a large chorus of fifth through 12th graders sang backup in harmony. Marella, 17, said she felt the group had practiced hard and was ready for the performance.

“I feel that being a part of this is a privilege and an honor,” said Marella. “All of the adults have been very supportive, and they are very proud of us.”

Since January, students with a vocal role in the performance have come together every Saturday morning to practice. Vincent Mercer, a senior at The Cardinal Gibbons School, Baltimore, who sang “Spirit, Like a River,” said it was hard getting up early every Saturday morning, but his love for singing is what drives him.

“We have achieved what we have been working for,” said Walter Oliver, a student at Cardinal Shehan School, Baltimore, who sang “We Are Called.” “It is worth the sacrifice and commitment.”

Alexandra Hobson and Benjamin Gluth proudly stood by their artwork as people walked by admiring and complimenting them on a job well done. Alexandra had two paintings on display, one of a polar bear and its cub and the other a painting of her and her best friend sitting on the beach watching waves crash before their feet.

“I love art because you can paint anything you want,” said Alexandra, a student at St. Louis, Clarksville. “You can express yourself in any way.”
Alexandra said thinking like an artist helps her to get through her schoolwork. She hopes to one day fill her own gallery with her many paintings.

“I get to use my hands to create something different,” said Benjamin, an eighth-grader from St. Ursula, Parkville. “I’m able to see things in a different way, but I can put what I saw into my own vision.”

Benjamin said he was inspired to create his “Fearsome Hawk” because of this dad’s love of birds. The silver, wire-framed hawk sat upon a tall wooden plank with its wings outstretched looking like it could fly. Directly next to the bird was a tall, thin, green statue of a man in a running position. Benjamin said his inspiration came from his older and taller brother. The young man dressed in a black suit said he hopes to continue his creative ability as he transitions into high school next year.

“You are surrounded by the best and most talented people in the archdiocese,” said the excited Molly Wright, a student The Catholic High School in Baltimore and one of the chorus members. “This has been a challenge but a good challenge. Just like anything you do, we are proud of what we have accomplished.”