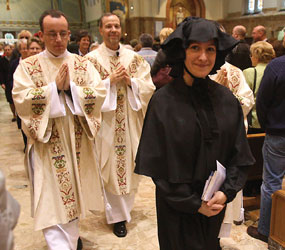 Two hundred years after St. Elizabeth Ann Seton arrived in Emmitsburg to found a ministry of education, hundreds of Catholics will commemorate her entry into town as they witness a live Aug. 2 reenactment complete with a horse-drawn Conestoga Wagon.

The special event is one of the highlights of a weekend of bicentennial celebrations July 31-Aug. 2 that will also include a Mass with Chicago Cardinal Francis E. George, the showing of an archival exhibit and tours of historic sites.

Born in New York to a prominent Anglican family, St. Elizabeth Ann converted to Catholicism in 1805 after the death of her husband two years earlier. The widowed mother of five arrived in Baltimore in 1808 at the invitation of the Sulpicians to work as an educator.

She journeyed to Emmitsburg with four companions in 1809 to develop a women’s religious community modeled on the Paris’ Daughters of Charity. The future saint established St. Joseph’s Free School in 1810, an all-girls institution that came without tuition. Its foundation is regarded as the start of the Catholic parochial school system in the United States.

Today there are nearly 2.3 million children in 7,200 Catholic schools around the country.

The Sisters and Daughters of Charity today minister in education, healthcare, social justice and other outreach efforts throughout the country and around the world.

July 31 – The Seton Shrine historic sites in Emmitsburg will be open from 10 a.m.-7 p.m. with the exception of the Stone House and White House, which will close at 5 p.m. The opening celebration in the Basilica of the National Shrine of St. Elizabeth Ann Seton begins at 7 p.m. A premiere showing of “The Seton Legacy” DVD will be featured.

Aug. 1 – Cardinal George, president of the U.S. Conference of Catholic Bishops, will celebrate a 9 a.m. Mass at the Seton Shrine. Throughout the day, visitors may tour Seton Shrine sites, view a Civil War encampment, watch “The Seton Legacy” DVD and participate in morning and afternoon information sessions. Session topics include:

“Charity Matters,” an exhibit of archival treasures including 19th-century embroidery, tapestry, paintings and a display by Daughter of Charity Sister Betty Ann McNeil.