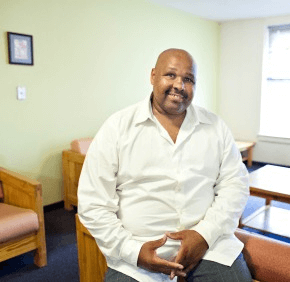 By Paul McMullen
pmcmullen@CatholicReview.org
Twitter@ReviewMcMullen
The Catholic Campaign for Human Development awards gathering in the Archdiocese of Baltimore turned into Throwback Thursday.
Project PLASE (People Lacking Ample Shelter and Employment) found permanent housing for more than 300 people in fiscal year 2013, and temporary housing for another 200. It employs 70, and has come a long way since 1973, when it was the brainstorm of then-recent college grads.
“Project PLASE literally would not be here today without the Catholic Campaign for Human Development,” Mary Slicher said, of a CCHD grant it received in the mid-1970s. “Without that funding, other groups wouldn’t have looked at us.”
Slicher, the executive director of Project PLASE, made her remarks Aug. 21 at St. Francis of Assisi in Mayfield, where Monsignor William F. Burke, pastor and director of CCHD in the Archdiocese of Baltimore, and Bishop Denis J. Madden awarded a total of $240,000 in national and local grants to eight non-profit agencies.
Project PLASE received $35,000. Its grant request explained that the funds would be used to “cover stipend/salary for 3.5 homeless persons to organize themselves and further the understanding and effects of poverty and homelessness.”
Finding shelter and solutions for those experiencing homelessness has long been the passion of Slicher, who grew up in St. Agnes Parish and attended its school, was a 1969 graduate of Mount de Sales Academy in Catonsville and seamlessly went from earning her undergraduate degree at UMBC to being one of the founders of Project PLASE.
Her office is located on the grounds of her home parish, St. Joseph Passionist Monastery in Irvington, where the former school was purchased by Project PLASE. While raising capital to convert classrooms into 96 housing units, it holds monthly food and clothing giveaways there, as well as employment fairs.
Project PLASE’s reach stretches from supportive services for military veterans and their families, to permanent housing for people such as Clifton Boney, who has resided at its facility on Maryland Avenue since June 2012.
Boney, 49, had dropped out of Northwestern High School in Baltimore as a senior, when he said a cousin “showed me how to make $200 an hour as a drug dealer.”
“That was the worst decision I made in my life,” Boney said. “I had a good mother, a good father. They worked hard. I didn’t want to work like that, and I didn’t want them to.”
When Boney came to Project PLASE in October 2011, he was HIV positive, estranged from his family and living on the street after spending a total of eight years in assorted prisons and shuffling through a series of “psychiatric wards and recovery centers.”
He since has received food, shelter, counseling and myriad support services.
“Project PLASE gave me the incentive and tools to address my issues,” Boney said. “It changed my whole way of looking at people.”
2014 CCHD grants
National grants: United Workers Association, $50,000; Project PLASE, $35,000; BRIDGE (Baltimore Regional Initiative Developing Genuine Equality), $30,000; BUILD (Baltimoreans United in Leadership Development), $30,000; Arundel House of Hope, $30,000; No Boundaries Coalition, $25,000; Out for Justice, $25,000.
Local grant: YES (Youth Empowered Society), $15,000.
Also see:
New presidents, principals to lead Catholic schools
School Sisters of Notre Dame celebrate 25 local jubilarians
Calvert Hall coach weighs in on ‘When the Game Stands Tall’ #CRBlog
PrevNext