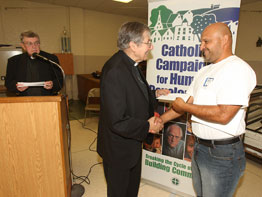 Moving testimonies from a formerly incarcerated woman, a 70-year-old woman whose mobile home park is closing, an immigrant trying to make a better life for himself in the U.S. and a young person trying to help her peers improve their communities were the main feature of the annual Catholic Campaign for Human Development luncheon Aug. 21.

During the luncheon, held at St. Francis of Assisi, Baltimore, the CCHD distributed $355,000 in local and national grants to 12 organizations.

“We’re happy every year to make these announcements,” said Monsignor William F. Burke, pastor of St. Francis and Baltimore’s CCHD diocesan director. “For the archdiocese, this is the largest amount in the history of the campaign.”

He said the grant recipients represent “a wide spectrum of great work.”

Ralph McCloud, CCHD’s director, told some 100 gathered in the church hall that they help put “faces and arms and hands and hearts to the people who do the work.”

The CCHD, started by the U.S. Conference of Catholic Bishops, has been working for nearly 40 years to help poverty-level income groups by offering them a way to help themselves to lives of dignity and self-respect.

Monica Cooper, a formerly incarcerated woman, spoke on behalf of the group Alternative Directions/Out for Justice, which helps to empower people inside and outside of the prison system, especially regarding their re-entry into society.

Ms. Cooper, who is about to graduate from The Community College of Baltimore, spoke about how those currently incarcerated spend “the majority of their time trying to survive prison,” and are often not prepared for life after they are released.

“Just trying to get ID is discouraging,” said Ms. Cooper, explaining that it took her two months to secure a government identification card.

She attributed her own success to being “a believer,” and said her glass is half-full.

“Together, our social ills can be healed,” she told the group.

Members of the Archdiocese of Baltimore contributed $252,500 to the annual November appeal for CCHD.

Bishop Denis J. Madden, urban vicar, thanked the organizations and the dedicated CCHD volunteers. He presented the grants along with Monsignor Burke.