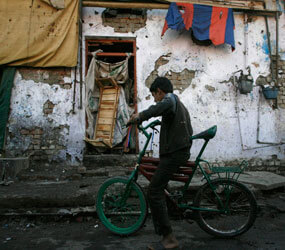 LAHORE, Pakistan – Prayers for peace were offered at a Mass and at prayer services in Lahore March 14, two days after a series of deadly bombings left 60 people dead and 100 injured.

Authorities said the incidents were the biggest militant attacks in Pakistan in 2010.

The families were forced to abandon their homes. They were living in tents near the blast site March 15.

During a Mass for the victims March 14, catechist Lazar Yousaf told about 50 people, including victims and their relatives, “The Lord has saved you and blessed you with a new life. You can take comfort in his blessing.”

Franciscan Father Abid Habib, regional coordinator of the Justice and Peace Commission of the Catholic religious major superiors, condemned the blasts after a prayer service originally planned to mark the second anniversary of the death of Chiara Lubich, founder of the Focolare movement.

“This is sickening. The innocent continue to be victims of terrorists and the government seems unwilling to fight them. They are trying to evade their responsibility and are blaming foreign involvement,” he told UCA News.

Father Habib said the church is “praying that terrorists change their ways and find peaceful solutions to their problems.”

In addition, about 300 Christians attended a March 13 prayer service for victims at the Sacred Heart Cathedral in Lahore.

The spate of bombings occurred days after a March 8 suicide attack in front of the Special Intelligence Agency’s provincial office, which killed 14 and injured 89.