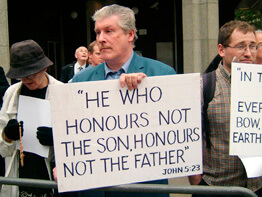 LONDON – About 50 Catholics sang hymns and chanted prayers outside Westminster Cathedral to protest the premiere of a concert they believed glorified Allah.

The protesters were angry that the London cathedral – considered to be the mother church of the 4.3 million Catholics of England and Wales – was being used to honor the Islamic notion of God.

The group was objecting to the performance of “The Beautiful Names,” a concert featuring the singing of the 99 names of Allah to solemn music composed by Sir John Tavener and commissioned by his friend, Prince Charles. With Prince Charles among the guests, security outside the cathedral was unusually tight June 19, with a large police presence and airport-style scanning machines.

The protesters, including several priests, gathered on the square in front of the cathedral about an hour before the concert began. They held up banners and placards quoting verses from the New Testament that affirmed the divinity of Jesus Christ and the doctrine of the Holy Trinity.

Father Michael Clifton, a retired priest from the Archdiocese of Southwark, said: “A concert like this should never be put on in a Catholic church because it is music which belongs to a foreign, alien religion, which is Islam.

“I have nothing against Islam as such, but this is not the place to do it. Allah is not a Christian god. Allah is not the triune God that Catholics believe in at all,” he told Catholic News Service.

Another priest at the demonstration, Father Tim Finigan, said: “We respect the Muslim faith, we have great respect for our Muslim brothers and sisters, but we have different beliefs about God.”

Father Finigan, who later led the demonstrators in reciting prayers and Scripture readings, described the protest as a “spontaneous gesture” from Catholics.

Sir John, 63, gained prominence after one of his pieces was played at the close of Princess Diana’s funeral in 1997.

To Muslims, the 99 names of Allah are some of the most important and sacred words in existence and describe all that is perfect about God.

“The Beautiful Names” is sung in Arabic and is divided into 11 groups of nine “tonal zones.”

Each new section was heralded by the calling of Allah by the BBC Symphony Chorus and the choristers of Westminster Cathedral, joined by tenor John Mark Ainsley. The choir was accompanied by a full orchestra and Tibetan gongs.

The 90-minute piece was partly dedicated to Pope Benedict XVI by Sir John, a convert to the Russian Orthodox Church.

In a June 15 statement, Monsignor Mark Langham, administrator of the cathedral, defended the performance on the grounds that it was “not a liturgical act of worship.” He said that in discussions with Sir John it was “agreed from the beginning that a work by a Catholic composer – Tomas Luis de Victoria – would be included in the program, to emphasize that there is one God worshipped by Christians and Muslims.”

“As the chief Catholic church in this country, Westminster Cathedral must reflect the church’s concern to dialogue with those of other faiths,” Monsignor Langham said.

In the introduction to his score, Sir John wrote: “Perhaps, by doing this in the language of music, one may contribute to an inward healing of the strife that permeates the modern world.”

Sir John’s brother, Roger, was on the piazza to view the demonstration. He told CNS that Sir John was “upset” that his concert had become the source of controversy.

“His intention is to bring all faiths together and under one roof,” he said.
“We all worship the one God … I can’t understand why there is a demonstration,” he added.