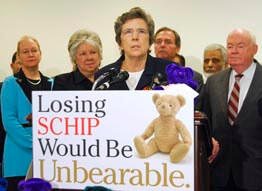 WASHINGTON – Catholic organizations have joined with a variety of medical, civic, labor and other religious groups in calling on Congress to increase funding for the State Children’s Health Insurance Program, despite a threatened veto by President George W. Bush.
Representatives of nearly three dozen organizations participated in a July 25 Capitol Hill news conference organized by the Catholic Health Association, which also released a new public opinion poll that showed Americans overwhelmingly support the program known as SCHIP.
“We stand united because we believe Congress and the president should do the right thing for our children and our nation – reauthorize a critically important program that is supported by the vast majority of voters,” said Sister Carol Keehan, a Daughter of Charity who is CHA president and CEO.
Others at the news conference represented the U.S. Conference of Catholic Bishops, Catholic Charities USA and the Society of St. Vincent de Paul, as well as the National Council of Churches, Jewish Council for Public Affairs, Islamic Society of North America, Lutheran Services in America, Episcopal Church, Religious Action Center of Reform Judaism and United Jewish Communities.
“We may not see eye to eye on many of the issues facing this nation, but we all agree that our children must be able to receive the health care they need to learn, to participate in school and to build their futures on a healthy foundation,” Sister Carol added.
By a 17-4 vote, the Senate Finance Committee recently approved the Children’s Health Insurance Program Reauthorization Act, which would provide an additional $35 billion to SCHIP over the next five years to maintain the current coverage levels and provide health insurance for 3.2 million children now without coverage. The increases would be funded by a 61-cent-per-pack rise in the federal tax on cigarettes.
Bush said July 18 that “if Congress continues to insist upon expanding health care through the SCHIP program – which, by the way, would entail a huge tax increase for the American people – I’ll veto the bill.” Instead he supports revisions in the tax code that would provide deductions to help more people to afford health insurance.
The Senate was expected to begin debate on the legislation before the end of July.
At the July 25 Capitol Hill event, Candy Hill, vice president for social policy at Catholic Charities USA, called it “a tragedy that 9 million children are living without health insurance in this country when we know that SCHIP works and is making a real difference in the lives of children from low-income families.”
“We can – and must – do better,” she added. “SCHIP should be reauthorized and strengthened so even more low-income children have the health care coverage they need to grow up healthy and strong.”
“We firmly believe that there is no excuse for any child in our nation to go without access to health care,” said John L. Carr, USCCB secretary for social development and world peace. “This is an important moral measure of our society and of this Congress.”
Roger T. Playwin, executive director of the National Council of the U.S. Society of St. Vincent de Paul, said it is a “moral imperative” in the world’s richest nation to make sure “that the children of the poor have access to quality health care.”
A poll commissioned by CHA found that 86 percent of respondents said Congress should vote to continue SCHIP, with 57 percent strongly favoring such a vote and 29 percent somewhat favoring it.
Asked specifically about the Senate proposal, 71 percent said they supported it (41 percent strongly and 30 percent somewhat). More than 60 percent of the respondents said Bush “would be doing the wrong thing if he vetoed SCHIP legislation.”
The survey of 800 registered voters, conducted July 19-22 by Public Opinion Strategies of Alexandria, Va., had a margin of error of plus or minus 3.46 percent.
Other Catholic organizations not participating in the news conference expressed support for expanded funding of SCHIP in a July 23 statement.
“When even one child is sick and cannot receive medical care, we are diminished as a nation,” the statement said. “Our faith and our Catholic social teaching demand that we foster a culture of life which includes health care for those who need it most.”
Signers of the statement included the Leadership Conference of Women Religious, Pax Christi USA, the national social justice lobbying group Network, Catholics in Alliance for the Common Good and several groups of men and women religious.