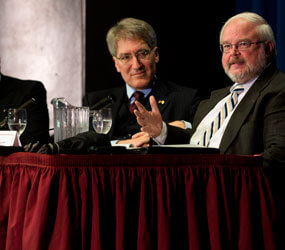 NEW YORK – Politics is a good thing, participation in public life is a moral obligation and Catholics need to do a better job of linking their beliefs to their actions, according to speakers at a Sept. 6 conference on “Faithful Citizenship: Voters, Bishops and Presidential Elections.”

The program at Jesuit-run Fordham University featured a lively exploration of a document on political responsibility issued every four years by the Catholic bishops of the United States.

“Polarization is seeping into our ecclesial life and very often we wonder (if) our faith shapes our politics or if it gets turned around to our politics shape our faith. We can divide up the work in our church, but we should not be dividing our community of faith,” said John Carr, executive director of the U.S. bishops’ Department of Justice, Peace and Human Development.

“All of us – bishops, professors, staffers, ordinary laypeople, academics, students – need to do a better job of linking what we believe to how we act in public life,” he added.

Since 1976, the Catholic bishops have issued a quadrennial statement linking church teachings to political responsibility. The most recent iteration, in 2007, is called “Forming Consciences for Faithful Citizenship: A Call to Political Responsibility from the Catholic Bishops of the United States.”

“At this moment of intense cynicism and frankly justifiable frustration with the political process, the most countercultural thing the church teaches and the bishops have said is that politics is a good thing, that participation in public life is a moral obligation and an essential part of being American and Catholic,” Carr said. “That is more countercultural in some ways than all life is sacred, that war ought to be a last resort, that the poor ought to come first, that marriage ought not to be redefined.”

He said Catholics share a bond of faith, not politics. “We are a church and not a lobby. We are a community of faith and not an interest group. What brings us together is the word of God and the teaching of the church, not politics and not ideology.”
Carr said the “Faithful Citizenship” statement lays out basic principles and applies them to pressing issues facing the country. Historically, versions of the document have summarized Catholic teaching, with an emphasis on the role of the laity and encouraged participation and engagement. “In public life, what we bring is not only what we believe, but what we do. Who feeds the hungry? Who shelters the homeless? Who cares for the poor?”
Carr said the statement “never declaimed any notion of telling Catholics how to vote” and has always given “priority to human life and dignity, expressed in different language through the years.”
“Faithful Citizenship” urges formation of conscience and practice of prudence, Carr said. It tells Catholics to resist evil and act on their affirmative responsibility to make things better. It says people must distinguish between issues of unequal moral importance. As an example, he said, “A million abortions are not the same as a cut in the WIC program.”
Carr said, “We need more Catholics in both parties in public life, taking what we believe into the public square and fighting for it. We need more dialogue within our church and we need to understand if politics is not about our fundamental values, then it is just about money, ego and power.”
Panelist Robert George, professor of jurisprudence and director of the James Madison program in American ideals and institutions at Princeton University, acknowledged that neither major political party fully embodies the principles laid out by the bishops.
He said the Republican Party needs “more of a dose of Catholic social thought and the Democratic Party needs a very heavy dose of the pro-life and pro-family message of the Catholic tradition.”
He said Catholics can use the issue of slavery as a template for political response in current times. Then, as now, people were raised in a culture that blocked their vision of the true and equal dignity of all members of the human family, he said.
George said Catholics can emulate Abraham Lincoln’s response to slavery. “We have to be persistent and relentless and join forces across the lines of religious differences to offer a common witness to inherent principles of basic justice.”
Carr suggested that both major parties establish life and dignity caucuses that would take the “rough edges off the libertarianism of the Republican Party and the individualism of the Democratic Party” and ultimately “get institutions working together to lift people up and empower people.”
Stephen Schneck, director of the Institute for Policy Research and Catholic Studies at The Catholic University of America in Washington, said “Faithful Citizenship” conveys the “glory and richness” of Catholic teaching and recognizes that politics and government are designed by the Creator and are useful for human dignity and the common good.
He said the document confuses some readers who look for “absolute and specific criteria that can be applied juridically to make a summary judgment that voting for such-and-such candidate would always be wrong. Politics is not reducible to morality in quite that way. Prudence is the primary virtue of political life,” he said.
The event was sponsored by the Fordham Center on Religion and Culture and took place at Fordham’s Lincoln Center campus in Manhattan.