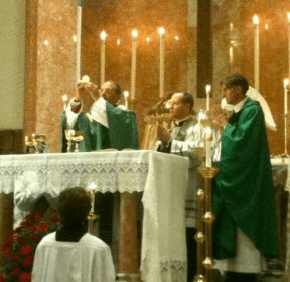 By Elizabeth Lowe
elowe@CatholicReview.org
Twitter: @ReviewLowe
Baltimore Auxiliary Bishop Denis J. Madden, who visited Syria in the earlier part of this millennium, is wary of the United States using military force in the Middle Eastern country.
“I don’t know what would be gained, other than making some kind of a statement,” said Bishop Madden, who heads the U.S. Conference of Catholic Bishops’ Committee on Ecumenical and Interreligious Affairs and from 1994-1996 was director of the Pontifical Mission for Palestine office in Jerusalem. “The possibility of it leading to more conflict, I think, is greater than what good it might do. I don’t think it will help either side or move either side to change its course. It’s a very dangerous situation right now.”
In an effort to promote world peace and avert what could become a world war, Pope Francis designated Sept. 7 as a global day of prayer and fasting for peace in Syria and throughout the world.
Pope Francis’ call for prayer and fasting came days after President Barack Obama proposed the United States carry out strikes against Syria after more than a thousand people died last month from a chemical weapons attack. Syrian President Bashar al-Assad denies he ordered the war crime against his own people.
Locally, Catholic churches in the Archdiocese of Baltimore observed the day of peace by ringing their bells for two minutes at noon and offering prayers for peace at Masses that day.
Baltimore Archbishop William E. Lori celebrated Mass Sept. 7 at the Cathedral of Mary Our Queen in Homeland and St. Mary in Hagerstown.
“As we pray for the gift of peace, especially in the most troubled areas of our world,” Archbishop Lori said in his homily at the cathedral, “let us consider, for a moment, how this relates to our families, to our formation in knowledge and virtue, to our homes, and ourselves.”
Citing a Chinese philosopher, Archbishop Lori continued, “If there is to be peace in the world, there must be peace between nations. If there is to be peace between the nations, there must be peace between cities. If there is to be peace between cities, there must be peace between neighbors. If there is to be peace between neighbors, there must be peace in the home. If there is to be peace in the home, there must be peace in the heart.”
“I think our prayers (for peace) can make a difference,” said Jim Henson, an usher at St. Mary in Hagerstown. “It’s all we’ve got.”
Invoking prayers for peace was “absolutely wonderful,” said Patsy Hose, a longtime St. Mary parishioner. Prayers are never wasted.”
What else can we do? “Pray more,” Hose said. “That’s all we can do. We have no power, just powerful prayers.”
Other Sept. 7 events that worked to promote peace throughout the archdiocese included an interfaith prayer service at the University of Maryland, Baltimore County in Catonsville; prayer services at Loyola University Maryland in Baltimore and Our Lady of Perpetual Help in Edgewater; Mass, eucharistic adoration and benediction at Mount St. Mary’s Seminary in Emmitsburg; and various events, including Mass and reciting the Chaplet of the Divine Mercy, at the National Shrine Grotto of Lourdes in Emmitsburg.
“It’s the people and the poor (in the Middle East) who are hurt the most,” Bishop Madden said. “There’s no denying the use of chemical weapons on people. It’s outrageous and terrible, especially on children. I think that at the time one has to move as forcefully as possible to move toward what would bring peace.”
The U.S. launching missiles and dropping bombs in Syria will not accomplish that, Bishop Madden said.
As of press time Sept. 10, President Obama had not yet made his case to the nation for a strike against Syria. The U.S. Congress was expected to vote Sept. 11 on whether to sanction military intervention.
Also see:
Pope Francis’ campaign for peace: See notable quotes and tweets from the pope
Thousands flock to Rome armed with power of prayer
Chris Gunty contributed to this article.
PrevNext