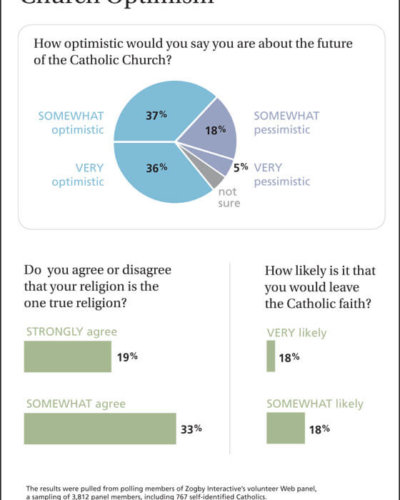 WASHINGTON – U.S. Catholics are generally optimistic about their church, according to the 2009 Le Moyne-Zogby Contemporary Catholic Trends survey released April 9.

Those Catholics who identified themselves as progressive were more likely to be pessimistic; even so, on this issue they were a minority within their group. Four percent were very pessimistic about the church’s future and 36 percent were somewhat pessimistic.

By contrast, those who identified themselves as “orthodox” Catholics were much more optimistic. Only 6 percent of that group said they were somewhat pessimistic, and just 1 percent very pessimistic.

The Contemporary Catholic Trends survey polled 767 Catholics out of 3,812 randomly sampled members of the Zogby Interactive Panel Feb. 23-25. The margin of error was plus or minus 3.6 percentage points.

The survey is a joint effort between the Zogby International polling firm and Le Moyne College in Syracuse, N.Y., a Catholic college that is the alma mater of Zogby founder and president John Zogby.

Of those who chose to identify themselves by their religiosity, the largest percentage, 20 percent, called themselves progressive. Eleven percent self-identified as orthodox, while 7 percent said they were evangelical, 4 percent said fundamentalist, and 3 percent said born-again.

Among the survey’s findings:

– More than 87 percent of all respondents said the sacraments were important to their Catholic faith, with 64.4 percent calling them very important.

– More than 80 percent said teachings about Mary as the mother of God were important to their faith, with 53.7 percent saying such teachings were very important.

– More than 89 percent said the church’s concern for the poor was important to their faith, with 60.9 percent calling it very important.

Less agreement was found on church opposition to abortion, the death penalty and gay marriage.

Those who found church opposition to the death penalty at least somewhat important totaled 48.2 percent, while 47.4 percent said it was somewhat or very unimportant.

Church opposition to gay marriage was considered important by 51.6 percent of those surveyed, but 45.8 percent said it was unimportant.

Asked about weekly Mass attendance, 58.3 percent of the Catholics polled said it was important, with only 30.1 percent calling it very important.

Distinct disagreement with church teaching on the priesthood arose in the survey.

More than 61 percent said an all-male priesthood was either somewhat unimportant or very unimportant to them, with only 35.4 percent saying it was important.

Close to a third of respondents said they communicate with friends using Internet chat services or Web sites. Close to half of those polled said they had up to 50 friends on Facebook, an increasingly popular social networking Web site.

With the survey taken at the beginning of Lent, respondents were asked what they were giving up for the liturgical season.

The largest percentage, 26.5 percent, said they weren’t giving up something but were focusing on adding good things. That answer was followed by what people said they were giving up: “eating meat on Fridays” (17.4 percent); “nothing” (16.6 percent); “candy/cookies/junk food” (12.1 percent); “not sure” (8.9 percent); and such bad habits as arguing and cursing (8 percent).

Those who were interviewed had volunteered to participate in periodic Zogby Interactive polls. The sample was weighted to reflect the political affiliation, age, race, gender and education of the U.S. adult population.