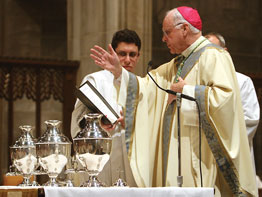 For Owings Mills resident David Vasquez, the annual Chrism Mass at the Cathedral of Mary Our Queen, Homeland, March 17 symbolized more than the blessing of the holy oils that will be used throughout the church year. It confirmed to him the clergy of the Archdiocese of Baltimore are strong and committed.

“I realize we have a shortage of priests,” said the 32-year-old parishioner of Sacred Heart, Glyndon. “But when I saw that huge procession of the clergy go by, wow, that was impressive and inspiring.”

Archbishop Edwin F. O’Brien oversaw the ancient tradition of consecrating the chrism oils that will be used in all archdiocesan parishes throughout the church year to anoint the newly baptized, to seal the candidates for confirmation and to anoint the hands of priests and the heads of bishops at their ordination.

Hundreds of priests, deacons, religious and laity witnessed the archdiocesan bishops make holy the sacred oil that will also be used to bless new churches and altars.

“I didn’t realize they take such care to bless all of the oils in all of the churches each year,” said Shawntea Branson, 23, of Annapolis, who will be fully received into the church March 22. “I also loved seeing the priests renewing their faith. I think it’s something we all have to do from time to time.”

Archbishop O’Brien requested the hundreds of religious men and women and lay pastoral ministers participating in the two-hour Chrism Mass to recommit themselves to their ministries.

He also asked the priests to renew their pastoral promises.

“My brothers, this celebration recalls the first Eucharist, at which our Lord Jesus Christ shared with his apostles and with us the call to the priestly service of his church,” Archbishop O’Brien said to the 100-plus participating priests.

He then turned to the hundreds of Catholics representing churches throughout the archdiocese in the packed cathedral and asked them to pray for their priests.

“Ask the Lord to bless them with the fullness of his love, to help them to be faithful ministers of Christ the High Priest,” Archbishop O’Brien said, “so that they will be able to lead you to him, the fountain of your salvation.”

In asking for prayers to help him faithfully fulfill the “Office of Apostle which Jesus Christ” has entrusted to him, the Baltimore prelate thanked the clergy, religious, laity and faithful for embracing him so warmly since his Oct. 1 installation.

Archbishop O’Brien thanked his two retired predecessors – Cardinal William H. Keeler and Archbishop William D. Borders – for building a strong archdiocese and told the priests how impressed he was with the parishes he has toured.

“I admire your priestly zeal,” he said during his homily. “Know of my support and gratitude.”