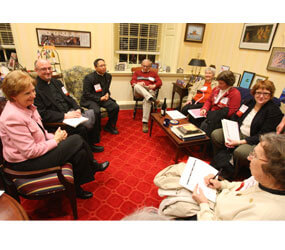 ANNAPOLIS – Karen Wingard had never lobbied her lawmakers before, but hearing that Maryland was on the verge of legalizing same-sex marriage provoked her.

“It’s the reason I’m here today,” said Wingard, a parishioner of the Catholic Community of St. Francis Xavier in Hunt Valley who joined more than 500 Catholics from across the state at the 27th annual Lobby Night Feb. 21 in Annapolis.

“Marriage is so foundational to society,” said Wingard, speaking moments before visiting her lawmakers and asking them to vote against same-sex marriage.

“We don’t just lay eggs and abandon them,” she said. “Our children need to be raised by a mother and father. We’ve become so very confused in our understanding about sexuality that we can’t see what should be obvious.”

Lobby Night participants met with their lawmakers to discuss a wide range of topics covering everything from the death penalty to a business tax credit benefitting children in nonpublic and public schools.

It was the same-sex marriage issue, however, that seemed to spark the most passion.

“It’s a sad day if they pass something like that,” said Pat Siejack, a parishioner of St. John in Hydes. “It’s just not right. God didn’t intend for two men or two women to be together.”

On Feb. 17 in a 7-4 vote, the Maryland Senate Judicial Proceedings Committee approved a same-sex marriage bill and sent it to the Senate floor, where it was expected to pass this week or early next week. The House of Delegates scheduled a hearing for Feb. 25.

The measure has strong support in the House and is expected to pass. Gov. Martin J. O’Malley has said he will sign the bill into law if it reaches his desk.

Thirteen parishioners of St. Ursula in Parkville and St. Michael in Overlea crammed into a meeting room with Sen. Katherine Klausmeier during Lobby Night. The Baltimore County Democrat had long struggled with her position on same-sex marriage.

“I’m going with the bill,” Klausmeier told her constituents. “I know I’m disappointing many of you. But, it’s just – for me – it was just a matter of fairness and that’s where I had to go.”

Asked why same-sex marriage was a “matter of fairness,” Klausmeier said she met with gay couples who pleaded with her to pass the bill.

“They said they wanted to be treated the same as everyone else,” she said, “and not second-class citizens and that’s how they felt.”

“The next thing you know,” he told his senator, “is that they’ll be other kinds of relationships that are being called marriage.”

Klausmeier said she would have preferred a civil-union bill, but such a measure stood no chance of passing. Her choice came down to passing same-sex marriage or doing nothing, she insisted.

“By golly,” she said, “I wish it never would have come around. It’s been hellish for me.”

Klausmeier said amendments were passed in committee that would prevent groups like the Knights of Columbus from being forced to hold same-sex marriage receptions in their halls.

In a written statement, however, the Maryland Catholic Conference noted the bill provides no protections for an individual’s religious freedoms, “such as those of a clerk forced to issue a marriage license to a same-sex couple.”

Mary Ellen Russell, executive director of the Maryland Catholic Conference, told Lobby Night participants that governments throughout the world have recognized marriage as the union of a man and a woman because of a married couple’s biological ability to bring children into the world.

“That’s the reason government has assigned special protections and special benefits to the relationship between a man and a woman,” she said in a briefing at St. Mary’s High School in Annapolis prior to the legislative meetings.

“It’s not to say anything about any other relationship,” she said. “It’s simply a fact of nature that that’s where we come from and, for the sake of children, we need to continue to protect that definition.”

Archbishop Edwin F. O’Brien rejected the arguments of some who he said classify opposition to same-sex marriage as a form of bigotry.

“Thankfully, thousands of you have had the courage to speak up for marriage – respectfully and in a thoughtful manner,” Archbishop O’Brien said. “You have not been silenced by those who falsely claim that our understanding of marriage is based on discrimination.”

Del. Kelly Schulz, a Frederick County Republican who opposes same-sex marriage, told her constituents there is already a widespread grassroots movement to start a referendum to overturn the same-sex measure should it become law.

“I think that we have support from areas where we may not have had support on other issues,” Schulz said. “The fact that it’s going to be coming during a presidential election will bring a very good turnout and I think that will be good for us.”

Lobby Night was sponsored by the Maryland Catholic Conference, public-policy arm of the state’s Catholic bishops.