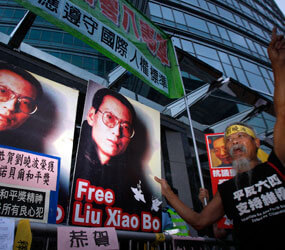 HONG KONG – The Hong Kong Catholic Justice and Peace Commission was among human rights groups that campaigned for the release of Liu Xiaobo, winner of the 2010 Nobel Peace Prize.

Members protested outside the Hong Kong office of China’s Commissioner of the Ministry of Foreign Affairs Oct. 8 as the Nobel Peace Prize winner’s name was announced in Norway, reported the Asian church news agency UCA News.

Chinese dissident Liu was awarded the peace prize for his long and nonviolent struggle for fundamental human rights in China.

Poon, a Catholic, said he believed Liu’s articles on democracy and the human rights manifesto Charter 08 will be widely read again and would let many people know how the Chinese government suppressed peaceful democracy fighters.

Liu was a strike leader during the 1989 pro-democracy rallies in Beijing’s Tiananmen Square. In December, he was sentenced to 11 years in jail for writing Charter 08, which called for free speech and multi-party elections.

“Liu’s work fits well to the spirit of the Nobel Peace Prize and Fu’s act was an insult to it,” Poon added.

“How unreasonable and absurd for the Chinese government to curb freedom of speech,” said Or Yan-yan, justice and peace commission project officer. “It also shows that China has not caught up with the world but only uses its economic power to suppress others.”