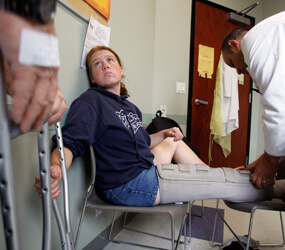 WASHINGTON – Catholic voters are divided when it comes to paying more in taxes for a health care overhaul that would cover the uninsured, according to a poll released July 1.

Forty-nine percent of everyone surveyed said they would pay more.

“It seems like once again, Catholics reflect society as a whole, and that not everyone understands that the marketplace as a whole has failed in providing adequate health care,” said Sister Simone Campbell, a Sister of Social Service who is director of Network, a national Catholic social justice lobby. “We get so focused on our families and our own needs that it’s hard to imagine ourselves in the shoes of another.”

The survey showed 50 percent of Catholics think it is the government’s responsibility to make sure everyone in the U.S. has adequate health care. Across the board, 53 percent of respondents answered this way.

“Catholics, like the rest of the country, have bought the idea that government doesn’t do things right,” Sister Simone told Catholic News Service. “They’re doing the conditioned reaction.”

Network advocates for a public health care plan, a significant subsidy to low-income individuals and small businesses and a pay-as-you-go system, she said.

To Victoria Kovari, interim executive director of Catholics in Alliance for the Common Good, which promotes Catholic social tradition, it was heartening that 69 percent of respondents said Americans should have the option of government-run health insurance. Likewise, 66 percent of Catholics said the same.

“That’s a part of who we are as Catholics,” Kovari said. “I think we all as Catholics have a responsibility to make decisions that benefit the common good.”

Providing health insurance benefits to the uninsured does just that, she said, adding that she thinks it will ultimately cost most Americans less than they think.

Kovari and Sister Simone said they do not know of any Catholic groups that oppose health care reform.

The U.S. Conference of Catholic Bishops holds that health care is a basic human right, according to its Web site.

The Catholic Health Association, like Network and Catholics in Alliance, works to help lay Catholics understand this message.

“There’s a continued need to educate the public on the importance and urgency of health care reform,” said Jeff Tieman, director of health reform initiatives at CHA.

The health reform poll was the first Quinnipiac University poll to break down respondents by evangelical Christian, Protestant, Catholic and Jewish, Peter Brown, associate director of the polling group, told CNS. This is because the group surveyed 3,063 registered voters; most of its previous polls and most national polls survey 1,000 to 1,200 people.

The margin of error in this latest poll was plus or minus 1.8 percentage points.