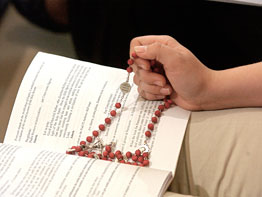 WASHINGTON – About 100 students at The Catholic University of America in Washington began their spring break by praying the rosary with Pope Benedict XVI via satellite from Vatican City March 1.

“It was beautiful to have all the college students from all over the world to be united in solidarity,” said Anne Funk, a senior majoring in social work at Catholic University, who prayed a Hail Mary that was broadcast around the world.

Before the pope arrived to pray the rosary and deliver a message, students participated in a prayer vigil that included Gospel readings; passages from Pope Benedict’s 2007 encyclical, “Spe Salvi” (on Christian hope); and prayers and student testimonies of faith.

Students from each university greeted the pope, some by jumping, waving flags and with spirited applause, as he entered the Paul VI audience hall in Vatican City. A smile stretched across the pope’s face as students from Catholic University applauded and held up banners that read “46 Days and Counting. See You Soon!” referencing the pope’s upcoming visit to Washington in April.

Pope Benedict will be in Washington April 15-17 and then will be in New York City April 18-20.

In his message to students after the rosary, the pope said, “Dear university students of Washington, D.C., I send warm greetings to you! With the help of God, I will be in your city in April. With your assistance, may America remain faithful to its Christian roots and to its high ideals of freedom in truth and justice.”

During the prayer service, Alba Garcia Bellon, a 19-year-old student from the University of Castilla-La Mancha in Spain, said she found her faith on a pilgrimage to Fatima, Portugal, when she was 14 years old. She also thanked the pope for showing the students hope.

“We university students should invite all to the life of hope which comes from faith and commit ourselves to working toward a new synthesis between faith and reason,” she said.

A student from the University of Sao Paulo in Brazil, Daniel Fassa Evangelista, said although he grew up in a good Christian home he found it difficult to live his faith in college. But with the support of friends and professors with whom he could share his faith and pray, Evangelista said he came back to Christ.

“In our studies, at work, while we rest, in our relationships, with our colleagues, in every one of our actions, we want to give God to the world and build a civilization of love,” he said.

The rosary occurred about six weeks before Pope Benedict makes his first visit to the United States since he became pope.

On April 17, he will visit Catholic University and address Catholic university and college presidents and other Catholic education leaders from across the United States.

After the prayer service, Claire Bordelon, a junior at Catholic University, said when the pope comes, he will “be in the places where we spend most of our time.” She told the Catholic Standard, newspaper of the Washington Archdiocese, that she was looking forward to sharing “the same space as he is.”

Many students did not know if they would see the pope in April, but they were content to see him on the satellite transmission.

A freshman, Deirdre Lawler, noted the “beautiful sense of unity that we had with the satellite connection.” Catholic University students led the other participants around the world in praying the fifth glorious mystery: Mary is crowned queen of heaven and earth.

Lawler, who said she has been in the presence of a pope before, called the experience “other-worldly” and “sort of mysterious.”

She said she also enjoyed the “extended presence (of the pope) through the archbishop here with us,” at the prayer gathering.

Maeve O’Doherty, a senior majoring in philosophy, said it was amazing to see the pontiff united in prayer with everyone. “You could just experience his love even though it was over electronics,” she said.