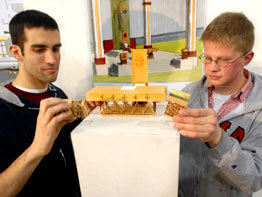 WASHINGTON – When Pope Benedict XVI celebrates Mass April 17 at Nationals Park, he will use an altar and chair designed by two students at The Catholic University of America in Washington.

Architecture students, working alone or in groups of up to four people, prepared their models and drawings between Jan. 18 and Jan. 23. The entries were judged Jan. 24, and the winner was announced Jan. 29.

“There is something very exciting about this work you designed, so focused on what we believe,” Archbishop Donald W. Wuerl of Washington told Mikolajczyk and Mullen.

“When all those people (at the papal Mass) are looking at this, you can say, ‘He (the pope) is standing at my altar,’” he added.

Originally, Mass organizers were going to set up the sanctuary at the stadium’s second base. By moving the altar to center field, an additional 4,000 people can attend the Mass. According to some estimates, about 45,000 seats will be available for the Mass.

In designing the winning entry, Mikolajczyk said he tried not to think too much about his work potentially being used by Pope Benedict. “That the pope will use our altar hasn’t sunk in yet,” he said.
Mullen said he and Mikolajczyk “tried to do something simple, but elegant. We were optimistic we had a chance at winning.” The two students also designed the lectern and pulpit that will be used during the papal Mass.

The winning team was assisted by Rachel Bailey of Napa, Calif., and Victoria Engelstad of Bradley Beach, N.J., both seniors in Catholic University’s undergraduate architecture program.

Mikolajczyk and Mullen’s model includes a 10-foot-by-4-foot altar with a substantial top, a repeating pattern of decorative arches beneath it and a smaller base. The front of the pulpit – also called an ambo – is adorned with images of the Bible and the Holy Trinity. The tall chair back is decorated with Pope Benedict’s papal coat of arms.

Mikolajczyk and Mullen said they spent an afternoon at the Basilica of the National Shrine of the Immaculate Conception studying the altar furnishings. “We wanted to incorporate elements that would remind us of Christ’s active presence and work in the liturgy,” Mikolajczyk said.

The 21 designs were judged by a panel that included Monsignor Barry Knestout, moderator of the curia and vicar of administration for the Archdiocese of Washington; Jane G. Belford, archdiocesan chancellor; Washington Auxiliary Bishop Francisco Gonzalez; and Monsignor W. Ronald Jameson, rector of St. Matthew Cathedral in Washington.

Monsignor Knestout, who holds a degree in architecture and is overseeing planning for the sanctuary at the papal Mass, praised the winning design for its “delicacy and elegance. The winners obviously gave deep thought to the design and how it related to the implementation of the pieces.”

Many of the entries, he added, showed “a strong sense of inspirational aspects.” Some of the designs, he noted, “reflect the joy of the Holy Spirit – a beautiful catechesis.”

The winning design, Monsignor Knestout said, included a combination of bold and delicate designs “that reflect the frailty of the human condition while showing (how) the strength of faith assists us and supports us.”

Mikolajczyk, 23, is from Staten Island, N.Y. He earned a bachelor’s degree in philosophy in 2006 from Catholic University and is enrolled in the first year of the university’s three-year master of architecture program.

Mullen, 24, is from Manchester, N.H. He earned a bachelor’s degree in architecture and a bachelor’s in civil engineering in 2007 from Catholic University, and expects to earn his master’s in December 2008.
When the winning design was announced, Archbishop Wuerl said that it was “a tribute to this school of architecture, Catholic University and the quality of students here.”