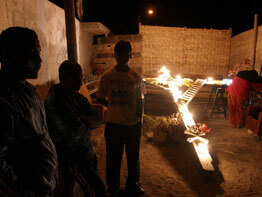 PACHACUTEC, Peru – Higinia Rupay remembers her terror as the ground began to heave and bricks from the neighbor’s wall crashed through the flimsy roof of her home.

She rushed into the street, fearing that her simple adobe house would not withstand the magnitude 8 earthquake that struck Peru’s southern coast Aug. 15.

By the time the tremors stopped, many houses in this tiny farming community, about 150 miles south of Lima, had been reduced to rubble. Hers showed no damage, but like most of her neighbors, she was hesitant to go back inside.

Her granddaughter was braver.

“She said, ‘Grandma, the house doesn’t have any cracks – I’m going to sleep in my room,’“ Rupay said.

The secret to the house’s strength is hidden in the walls, where researchers from the Pontifical Catholic University of Peru are testing a system that uses wire mesh to reinforce the corners of the building, typically the weakest part of an adobe house.

“I asked if (the reinforcement) meant the house would not collapse,” Rupay said, recalling the engineers’ first visit nearly 10 years ago. “They said the wall might crack, but it would give us time to get out.”

More than 80,000 homes were destroyed and more than 40,000 were damaged seriously in the earthquake, according to Peru’s National Civil Defense Institute. Most were made of adobe.

Wider use of wire mesh reinforcement might have saved more of the structures, and engineers from the university hope that people can be encouraged to rebuild using an even sturdier design to protect houses the next time an earthquake strikes.

“In Peru, as in many countries, a large percentage of people live in mud-brick houses because they have no alternative,” engineer Marcial Blondet, dean of the School of Graduate Studies at the university, told Catholic News Service. “But if the mud has not been baked, it is very weak. It breaks without warning, and often those fractures lead to complete collapse.”

As a result, the place where people should feel most secure becomes a death trap, he said.

Adobe houses are often poorly constructed, and walls are likely to separate at the corners, according to engineering professor Daniel Quiun. So in 1998 and 1999, when the researchers began testing reinforcement methods, they traveled to various parts of the country looking for houses that had design flaws.

One of the buildings they chose was the house where Rupay and Legua live. The couple built one room of ordinary brick, but the bedrooms are adobe. Researchers trained a local brick mason to attach wire mesh panels to the adobe walls at the corners and around doorways.

“Then we had to wait for an earthquake to come to see what would happen,” Quiun told CNS.

That house and another about 15 miles away withstood a smaller quake in 2003 as well as the one in August, although neighboring houses were reduced to rubble. Heavy machinery is still clearing debris from the street where Rupay and Legua live.

“We were sorry to see so much destruction, but happy that the design worked,” Quiun said.

While the reinforcement does not necessarily mean the house will withstand a strong earthquake, the mesh is designed to keep the walls from collapsing, giving the occupants 20-30 seconds to get out of the building.

The researchers also have found ways to build adobe houses that are even more earthquake resistant. Some of those designs have been tested in the university’s engineering laboratory, where small test models of adobe houses are placed on a platform that is shaken to simulate earthquakes of different magnitudes.

In one of the strongest models, the bricks are formed around a lattice of bamboo-like cane.

Another involves virtually wrapping the house with a plastic mesh that is tied in place with cords laid across the bricks as the walls are built. The researchers have designed a simple instruction manual illustrating the technique, and Blondet hopes that government officials will encourage people to use that design when they rebuild.

The plastic mesh, which is not manufactured in Peru, is more expensive than wire, but Peruvian President Alan Garcia has promised $2,000 to every family whose home was destroyed in the earthquake. That would be enough to build a simple, four-room, reinforced house measuring about 540 square feet, Blondet said.

Offering a foolproof design is only half the battle, though. The challenge is to get the information into people’s hands and convince them to adopt new building techniques.

“Technical solutions have existed for some time, but many people either aren’t aware of them or don’t apply them,” Blondet said. “We have tried many things, but they have mainly been limited to pilot houses. We want to bring about a transformation” in the way people build their homes.

The university is teaming up with the international humanitarian aid agency CARE to introduce the new design, and the researchers hope the national and local governments will support the effort.

“Earthquakes are going to keep happening” in Peru, Quiun said. “We have to be prepared.