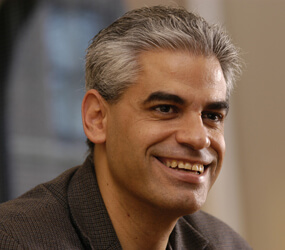 In a statement issued late May 27, the White House announced Diaz’s nomination, along with nominees for ambassadors to the United Kingdom, France, Japan, India and several other countries.

Diaz served as a member of Obama’s Catholic advisory team during the campaign and was a regular campaign spokesman on Obama’s behalf, particularly in the Spanish-language press.

“I am very honored, grateful, and humbled that President Obama has nominated me to serve as ambassador to the Holy See,” said Diaz in a statement forwarded to Catholic News Service by the university. “If confirmed by the U.S. Senate I will continue the work of my predecessors and build upon 25 years of formal diplomatic relations with the Holy See. I wish to be a bridge between our nation and the Holy See.”

A native of Havana, Diaz was praised as “a leading Hispanic theologian in the United States,” by Benedictine Abbot John Klassen, chancellor of St. John’s University.

In a comment e-mailed to CNS, Abbot Klassen said Diaz “is a skilled Trinitarian theologian who is passionate both as a teacher and a scholar. He is a strong proponent of the necessity of the church to become deeply and broadly multicultural, to recognize and appreciate the role that culture plays in a living faith.”

Diaz would be the first Hispanic to represent the United States at the Vatican. Like several of Obama’s other prominent nominees – including Judge Sonia Sotomayor, nominated to the Supreme Court – Diaz comes from humble beginnings. His father worked as a waiter and his mother did data entry work, and their son was the first member of the family to attend college.

Archbishop Pietro Sambi, apostolic nuncio to the United States, called Diaz “an excellent choice because he knows very well the United States and because of his background in the Catholic Church.”

Latin Americans “should be very proud,” he told CNS during a symposium May 28 at The Catholic University of America that the archbishop was attending. Coincidentally, the topic of the daylong event was the history of U.S.-Vatican diplomatic relations.

In an interview with CNS during inaugural festivities in January, Diaz said he thought “the presidency of Barack Obama represents a new opportunity for all of us” for racial healing.

Diaz said Obama was “committed to working” with people who defend “life in the womb” and deeply respects people who hold positions he does not agree with.

The announcement of the nomination capped months of speculation about who Obama would select to represent him at the Vatican. In early April the Vatican press spokesman took the unusual step of shooting down persistent rumors that the Vatican had rejected several potential nominees, including Caroline Kennedy, supposedly because they support legal abortion.

“Wherever we can, we should advance life at all stages,” Diaz said in January.

One White House source described Diaz as “clearly pro-life” and said the decision to select a respected theologian instead of a big fundraiser or political mover and shaker is an indication “of how seriously the administration is taking the relationship with the Vatican.”

Diaz would fill the vacancy created by the departure of Harvard law professor Mary Ann Glendon, who was named ambassador in 2007 and left the post in January.

His Senate confirmation hearing has not yet been scheduled. It was not known if it would come before Obama’s trip in early July to Rome, during which the president is expected to meet with Pope Benedict XVI.

The St. John’s statement said Diaz’s academic interests – besides his focus on the Trinity – also include theological anthropology and Latino/Latina theologies.

His published materials include the book “On Being Human: U.S. Hispanic and Rahnerian Perspectives” (Orbis Books, 2002), for which he received the Hispanic Theological Initiative’s 2002 Book of the Year award from Princeton Theological Seminary. He also is co-editor of the book, “From the Heart of Our People: Latino/a Explorations in Catholic Systematic Theology” (Orbis Books, 1999).