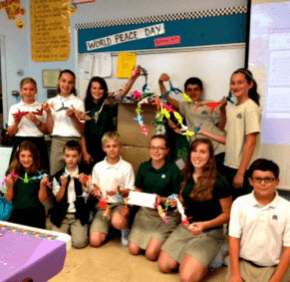 The following is a roundup of school news from the Archdiocese of Baltimore.

In September students from Mother Seton School in Emmitsburg sent 1,000 origami paper cranes to students at Sandy Hook Elementary School in Newtown, Conn. to show their support for that community.

They folded the paper cranes in September 2012 as part of the school’s annual International World Peace Day celebration. The cranes had been on display at the school to welcome visitors.

Karolyne Myers, art teacher at Mother Seton, worked with students on the project.

“For International World Peace Day,” Meyers said in a statement, “I like to integrate art, peace, faith, culture and citizenship in a meaningful project that not only educates but inspires.”

Meyers hopes the cranes will inspire peace in Newtown.

This year’s theme was “Pinwheels for Peace,” which began as an art installation project created by two art teachers from Florida in 2005, according to the school. It has grown into an international movement.

The pinwheel was selected as a symbol of youth and innocence. Students decorated pinwheels with their thoughts and artistic self-expression about peace, according to the school.

Karolyne Myers, art teacher and project coordinator, conceived of the World Peace Day celebration as a way to integrate art, culture, faith and citizenship into a project that inspires and educates, according to the school.

The celebration began with a prayer service.

The award is presented annually to an outstanding Catholic High alumna who demonstrates the Franciscan core values of personhood in community, loving service, ongoing conversion, witness to justice, peace and reconciliation and stewardship, according to the school.

Ciotola is a certified trainer-educator-practitioner of psychodrama, group psychotherapy and sociometry, according to the school. She has 40 years of experience in education, group facilitation and lifestyle counseling. She is also a certified health education specialist, as well as an ACE Certified MINDBODY Specialist.

Ciotola has designed and taught health and fitness classes in higher education, facilitated eating disorder support groups and worked in academic, hospital and community settings, as well as private practice, according to the school.

She is also the founder of the Eating Disorders Resource Network, a collaboration between the National Eating Disorder Association and other like-minded organizations, according to the school.

Ciotola has also volunteered to lead an in-service for Catholic High employees and has organized the Alice Runkles Endowed Scholarship Fund in remembrance of her aunt, according to the school. In addition, she co-wrote the book “Healing Eating Disorders with Psychodrama and Other Action Methods.”

“I was surprised and honored to learn that I was receiving the award and wanted to accept in honor of my aunt (deceased) Alice Miller Runkles ’47,” Ciotola said in a statement.

The award is presented annually to an outstanding Catholic High alumna who demonstrates the Franciscan core values of personhood in community, loving service, ongoing conversion, witness to justice, peace and reconciliation and stewardship, according to the school.

Trapani, Catholic High’s technology director, works with student tech groups to share her information systems knowledge and experience, according to the school.

Trapani, who supports and attends fundraising and alumnae events, is chairwoman of the alumna association’s networking committee, does IT consulting for small businesses and organizations and serves as a lector at St. Ignatius, Hickory.

“I felt very blessed and honored to receive the Distinguished Recent Alumna Award,” Trapani said in a statement. “The entire Catholic High community has truly inspired me to practice the Franciscan values learned as a student in my professional career.”

Mercy High School’s Cross Country team collected and donated more than 200 school supplies to The House of Ruth in September.

“Back to school is such an exciting time,” Elizabeth McSorley, Mercy’s Cross Country team captain, said in a statement. “I have always enjoyed shopping for supplies and picking out a new backpack. It is a time for fresh starts and new challenges, just as it is for the residents at The House of Ruth. I have been blessed with the privilege of an excellent education. I want the children at The House of Ruth to have the tools they need to pursue their education, even during difficult times.”

McSorley and her teammates Bridget Michaels, Elizabeth Stillinghagan and Katie Roberts delivered the items to The House of Ruth on Sept. 23, the day before the Feast of Our Lady of Mercy, according to the school. On Sept. 24, 1827, Catherine McAuley, foundress of the Sisters of Mercy, opened a house for the education and care of women and girls in need in Dublin, Ireland.

The team hopes the project motivates athletes in all schools to look beyond their fields, courts and diamonds to help others who are suffering and in need, according to the school.