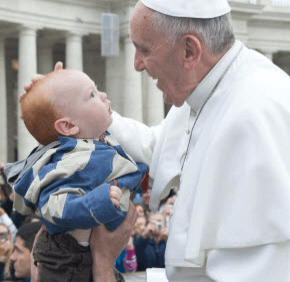 Katie Scrivener worried that her infant son, Fulton, would cry when he encountered a very important man in Rome.

She was the one who wound up weeping, albeit tears of joy.

One of the enduring images that came out of the weekly general audience Pope Francis gave in St. Peter’s Square Nov. 20 has the pontiff trading gazes with Fulton Scrivener, who will celebrate his first birthday Dec. 19.

In a photo that ran the next day on Page 1 of L’Osservatore Romano, the Vatican newspaper, the Holy Father shows unabashed joy as he places his right hand on the head of Fulton, a little red-headed stranger wearing a blue and white raincoat and an inquisitive expression while being held aloft by Vatican personnel.

Fulton is in the fourth generation of a family that lives on a farm in Davidsonville. While some are parishioners of nearby Holy Family, Katie describes herself and her husband, Nate, as “church-hoppers,” who favor their Redemptorist friends at St. Mary in Annapolis, but also attend Our Lady of the Sorrows in West River.

The 25-year-olds met while students at Christendom College, a Catholic liberal arts college in Front Royal, Va. They were not novices at the papal audience, as both spent the fall 2009 semester in Rome, taking classes near the Vatican.

“Every morning, we would walk through St. Peter’s Square to get to classes,” said Katie, who, on a family trip to Rome when she was 12, saw her baby sister, Nora Cruser, be blessed by Blessed John Paul II. “This was the third audience together for Nate and I. We went to two given by (Pope) Benedict, but he really didn’t stop to visit with people like Francis does.”

Nate is the fourth of eight sons of Rob and Anne Marie Scrivener, who home-school, then send their boys to Christendom. Ben Scrivener, 21, is a Christendom student spending the semester in Rome; younger brother James, 15, accompanied Nate and Katie on their recent visit, which saw them arrive in Rome Nov. 19.

That night, they bought rosaries, in the hope they would be blessed the next day by Pope Francis at his 10 a.m. audience. Team Scrivener, up to six with the addition of Ben’s girlfriend, Katy Arnold, awoke at 5:30 a.m. (11:30 p.m. the previous night on the East Coast), bundled Fulton into his baby carrier and began their vigil in a long, snaking line.

Once in St. Peter’s Square, Katie describes them staking out a good spot, providentially near a tour guide who pointed out the Scriveners to a security detail scouting photo opportunities.

“When Francis came by,” said Katie, who is carrying her second child, due in June, “I said, ‘He has to kiss him.’ The pope zig-zags in a random fashion, and everyone was getting so excited. The guards came back to us, and stopped Francis at Fulton. Francis was watching him, waiting for him. I was so worried, that Fulton would be crying because of the commotion, but I was the one crying.

“It was so wonderful. You have to be a fan of the pope. People say he’s too liberal, too conservative. We love him because he’s the Holy Father. How can you not love him?”

The Scriveners returned home Nov. 27, bearing video of the meeting and copies of the Nov. 21 issue of L’Osservatore Romano that featured the photo. At Thanksgiving dinner the next day, 30 savored turkey, trimmings and their own audience with Fulton.

“He is the cutest thing,” said Bev Hinkell, his great-grandmother, who alerted the Catholic Review to the photo. “The expression on the pope’s face is priceless. That’s what I do when I see Fulton, break out in a smile.”

Katie spoke to the Catholic Review on the phone Nov. 29, while Nate worked at Reliable Contracting in Millersville and Fulton napped.

And yes, their son is named for Venerable Archbishop Fulton Sheen, the pioneering televangelist who reached millions via radio and then TV from 1930 to 1968.

“When I was pregnant, Fulton became venerable,” Katie said. “I knew it was a boy, so we were studying masculine names. It’s almost a perfect name, having an almost-saint to look after him.”

Day of Prayer and Pampering gives caregivers a much-needed break