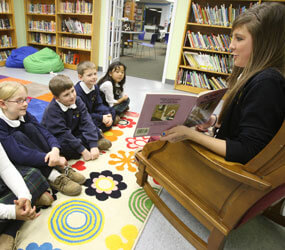 From dedicated teachers to strong academics, parents have many reasons to pursue a Catholic school education for their child. But while a solid curriculum and the latest technology are vital, Catholic schools offer something else essential to a child’s foundation – timeless lessons on values, morals and the importance of giving back.

At St. Thomas Aquinas School in Hampden, School Sister of Notre Dame Marie Rose Gustatus likens the values code her students recite on a daily basis to the Ten Commandments.

The code, which was posted in the school in 2008, includes terms such as responsibility, hard work, self-respect, tolerance, forgiveness and honesty.

She said parents have responded “wonderfully” to the idea of the values code and receive a values code card to replace on their refrigerator.

Bonnie Russo, development director and teacher at the school, said during Catholic Schools Week, each class has chosen a value, which they will highlight on their classroom door.

“It’s been a positive all the way,” Sister Marie Rose said.

At St. Mary School in Annapolis, eighth-graders learn the value of giving back by participating in a “Faith in Action” project. Each student selects a group they want to do community service for and volunteers at least 10 hours there. Some children are so enthusiastic about the organization they chose, they complete more than 100 hours, said Sandy Gateau, an alumna of the school who teaches science and who helped start the program.

“We encourage them to choose a program they have a passion for or that they would like to learn more about,” said Gateau, who is in her 19th year at the school.

In addition to volunteering their time, students must also create a website for their project, complete a research paper for their language arts class relaying what they’ve learned and write reflective pieces for religion class. At the end of the year, children create a public service announcement encouraging others to do service for those groups as well.

“They see that even a small amount of community service can make a big difference,” Gateau said.

In a reflection paper, eighth-grader Veronica Mount, who chose to spend her time sewing blankets for children through Project Linus wrote, “My faith journey has shown me that God will be with me through all the ups and downs in my life, and I want the children in the hospital to feel that way through the homemade blankets they receive.”

Thomas Bonfiglio said he spent his time with the Chesapeake Bay Foundation because even though he lives on the water, he doesn’t know enough about the bay.

“Another reason I chose CBF is to keep the wildlife in the bay alive. Dirty water is very bad for our bay’s aquatic creatures.”

In Essex, Our Lady of Mount Carmel School students are learning everything from leadership to the importance of volunteer work.

Kelly Aquilla is one of a handful of seniors participating in a Leadership Internship led by high school principal and president of the campus, Kathleen Sipes.

The seniors select books to share with students in the kindergarten through the second grade and also plan a corresponding activity.

Ally Emerson recalled reading the book “There was an old lady who swallowed a fly” with students and then making a mobile of all the items the woman ate.

“They’re all smiles,” Emerson said of the children. “I don’t think we had one problem the entire semester with any child.”

For Aquilla, who wants to go into teaching, participating in the leadership internship has offered valuable lessons.

“I know now it’s a lot more difficult (than I thought) to entertain children for 45 minutes,” said Aquilla, who read the book “Snowflake Bentley” with the children and helped them design paper snowflakes. “It’s a lot of hard work. You think you’re just going to color with the kids, but they have a lot of needs.”

Students have taken their values and sense of giving back beyond a class setting, helping to relocate and redo the school library. They carried and sorted books and wiped down shelves.

Emerson said several students also came together to paint and do outside maintenance at the school.

“We have had so many ideas, and we did everything on our own,” Emerson said.

The students can definitely see the value of attending a Catholic school.

“Talking to other people who have left the school, everybody comes back because this school and Catholic schools in general just seem to have a different feel,” Aquilla said. “There’s more love and there’s more family. Teachers care about and know your life story and want you to succeed. How many principals will stay after school and help you with your homework and know every kids name? At Catholic schools, you have an identity.”

“They live to serve,” Sipes said.