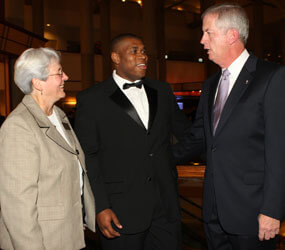 Cruises to the Caribbean, a French chateau in Normandy and a Labrador Retriever puppy were some of the items up for auction at the 2nd Annual Gala to benefit Catholic education in the Archdiocese of Baltimore Oct. 2.

The loudest “oohs” and “aahs” at the Hyatt Regency ballroom, however, were reserved for the success story of Ricardo Johnson, a guest of honor who provided strong testimony to the power of a Catholic education, and the Catholics who support the institution.

Johnson, 24, is clerking for the chief judge of the Maryland Court of Appeals and awaiting the results of his bar exam, which he took in July after three years of study at the University of Maryland School of Law.

That followed a stellar stay at La Salle University in Philadelphia, where he was valedictorian in the Class of 2007. Johnson’s academic launching pads were Mount St. Joseph High School, where he earned his diploma at age 16, and Mother Seton Academy.

“I can’t imagine where I’d be,” Johnson says, “if I hadn’t gone to those places.”

A non-Catholic, Johnson applied for admission to Mother Seton Academy after his single mother, Angela Berkley, heard good things about the tuition-free middle school on Baltimore’s east side that serves children with the greatest economic need.

At the time, she was working at Father Charles Hall School, which closed at the conclusion of the 2009-10 school year.

Johnson is the youngest member of the Board of Directors at Mother Seton Academy. When it dedicated a new campus in 2009, School Sister of Notre Dame Charmaine Krohe, president of the school, invited him to speak.

It’s no coincidence that his fellow board members include Xaverian Brother James M. Kelly, the president of Mount St. Joseph.

“Brother James let Mother Seton Academy know that its students would be welcome at Mount St. Joe,” says Barry Fitzpatrick, the school’s principal, “and that we would provide as much tuition assistance to them as possible.”

At Mount St. Joseph, Johnson sang in the gospel choir and was News Editor of The Quill, the student newspaper. He continues to describe Fitzpatrick as a mentor.

“He always sent letters when I did well,” Johnson says. “I realize that he sends them to all his students, but that touch made you feel special.”

“It’s easy to understand why our parents sacrifice so much,” Archbishop Edwin F. O’Brien said after a brief video told Johnson’s story. “Right now there are any number of Ricardos in our schools – and many more who aren’t.”

On Oct. 1, Archbishop O’Brien formally accepted the recommendations of the Blue Ribbon Committee on Catholic Schools, which conducted a 16-month study of the archdiocese’s school system and issued a report and strategic plan last June.

Committee recommendations include the establishment of an archdiocesan school board. Archbishop O’Brien announced the appointment of Frank P. Bramble Sr. to serve as vice chair of the board. Bramble chaired the Blue Ribbon Committee.