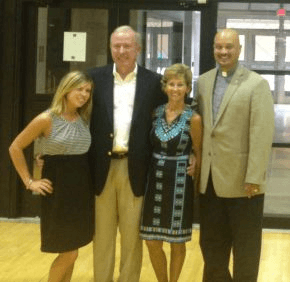 While school board members across the Archdiocese of Baltimore share an abiding concern for the students of their respective schools, the experiences and relationships that brought about that concern vary widely.

John Phelps has no children who attend or have attended St. Frances Academy, but when he watched the Panthers get trounced on the baseball field by his son’s team a little less than 10 years ago, something about the inner-city kids impressed him.

“It was just the way they carried themselves, even though they rarely won a game in those days,” said Phelps, 57.

He was familiar with the area around St. Frances, located off Greenmount Avenue, if not the high school itself, through his over four decades of work for Carroll Independent Fuel Company, of which he is now president.

“I’ve been around the neighborhood, and, frankly, a lot of these kids don’t have a shot,” he said.

The more Phelps learned, the more impressed he became.

“It’s just a little oasis that produces really good citizens,” he said, noting that the commitment of the teachers over there is “extra strong.”

Through Boles, Phelps eventually met Oblate Sister of Providence John Francis Schilling, the school president, for coffee. She invited him to join the school board.

A different path led Trish Garland to a school board. Having – among other endeavors – served as a mentor, designed a local Girl Scouts badge and served as national vice president of the Society of Women Engineers, the semi-retired chemical engineer had much to offer young people, and was open to a local outlet.

Father Frank Bauer, then her pastor at Our Lady of Perpetual Help in Edgewater, asked her to join the board at the School of the Incarnation in Gambrills, which then served six nearby parishes, each of which contributed two members to the board. (The school has since converted to the archdiocesan collaborative school model.)

“It was not a hard decision for me,” said Garland, 54, who has been interested and vested in science, technology, engineering and mathematics since long before the STEM acronym appeared in popular use.

Kathy Deppe’s path to a school board was perhaps more conventional. As a member of the Archbishop Spalding High School class of 1982 and mother to a 2015 graduate as well as a daughter who will be a freshman in 2016, Deppe, 51, had a well-established relationship with Severn school.

As a key member of the planning committee behind the Spalding Celebration, an annual dinner and cocktail event with live and silent auctions, Deppe’s organizational skills and fundraising prowess were well known to the school.

She was invited to apply for the board and was voted onto it this year.

“I never have enough time, but I always try to make time,” said Deppe, who is CEO of Valley Lighting, a commercial lighting distributor with Oriole Park at Camden Yards, T. Rowe Price and Harborplace among its customers.

Previous school board experience was not common to Deppe, Garland and Phelps, but the three have working knowledge of strategic planning and the mechanics of running a board.

Deppe has served on her company’s board as well as that of the Baltimore section of the Illuminating Engineering Society, an international community of the lighting industry.

Phelps said that he has served on “bank boards and things like that.”

What kind of person do school boards need?

The St. Frances board has included professionals – Anthony Ashton, an attorney, and Rodney Horton Sr., vice president of Horton Mechanical Contractors, for example – who have lent their expertise pro bono to helping the school fulfill its mission, Phelps said.

Garland, who is president of the Incarnation school board, also touted the value of subject-matter experts, especially when it comes to chairing the various committees of a school board.

“We’ve been very lucky,” she said. “Our facilities chair is Nolan McCoy, who works for the archdiocese. He brings a certain level of rigor to that committee.”

McCoy is the archdiocesan director of facilities and real estate.

Garland, Deppe and Phelps agree that the rewards of serving on a Catholic school board are significant and tangible.

“It’s not like a charity where you don’t see what your contribution does,” Phelps said. “With this, you see the kids at graduation – they get their diplomas, and you’re thinking, ‘Wow, there they are. We did something.’”