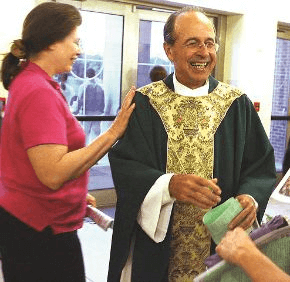 UPDATED – Monsignor Arthur  F. Valenzano, a man described by Archbishop William E. Lori as a priest of “tremendous pastoral love” who touched the lives of thousands of people throughout the Archdiocese of Baltimore, died Sept. 5 after a lengthy battle with acute myeloid leukemia.

The 24th rector of the Basilica of the National Shrine of the Assumption of the Blessed Virgin Mary in Baltimore was 66 and had undergone two bone marrow transplants, the first in 2006 and a second in 2013.

Among previous assignments, Monsignor Valenzano was the former pastor of St. John in Westminster and St. William of York in Baltimore.

Archbishop Lori recalled that when he first arrived in Baltimore in 2012, he was nervous about knocking on the door of the archbishop’s residence at the basilica and not knowing what was on the other side. Monsignor Valenzano greeted him and welcomed him.

“I could sense right away that he was a loving priest,” Archbishop Lori said.

The archbishop remembered that at the news conference announcing his appointment to Baltimore from Connecticut, he was encouraged when Monsignor Valenzano caught his eye and gave him a simple smile.

“That’s the same smile thousands of parishioners and many of our brother priests have seen,” Archbishop Lori said.

“He brought spiritual joy to every occasion,” Monsignor Farmer said. “You just felt better when you were near him.”

While serving as pastor of St. John for 17 years beginning in 1993, Monsignor Valenzano oversaw a rapidly growing congregation that necessitated the 2003 erection of a new church – the largest since the construction of the Cathedral of Mary Our Queen in Homeland. He also helped develop and implement plans to convert the previous church into a reception hall known as The Portico.

“The greater awareness we have of the real presence of Christ in the Eucharist, the more real Christ is in the day-to-day challenges of everyday life,” Monsignor Valenzano said in a 2002 interview with the Catholic Review.

Father Brian Nolan, who was a young associate pastor at St. John in the early 2000s, remembered seeing his mentor in prayer before the Eucharist every day from 5:30 to 6:30 a.m.

Father Nolan noted that numerous seminarians and newly ordained priests were stationed to St. John – all of whom aspired to be like Monsignor Valenzano.

“He was one to emulate because he really imitated Christ,” said Father Nolan, chaplain and director of campus ministry at Mount St. Mary’s University in Emmitsburg.

Father Nolan remembered a time he “messed up” early in his assignment at St. John.

“I was so nervous to tell Father Art,” Father Nolan recalled. “After I told him what happened, he said, ‘Oh, I did that too when I was a new priest.’ It was so consoling and so very encouraging.”

Norma Perron, who worked with Monsignor Valenzano as St. John’s administrative assistant, said the priest related well to people because he was approachable. Over the years, he counseled many people facing difficult life struggles.

“Whenever he met anyone new, he made sure they felt like he was their best friend,” Perron said. “He was never too busy to be present to anyone who needed him. Everyone was important to him.”

A native of Frostburg, where he grew up in St. Michael Parish, Monsignor Valenzano knew from a young age he was called to the priesthood. His seminary studies were completed at St. Charles College Seminary in Catonsville and St. Mary’s Seminary in Roland Park.

Ordained to the priesthood by Archbishop William D. Borders in 1975, Monsignor Valenzano’s early assignments included stints as associate pastor at St. Ambrose in Park Heights and St. Mary of the Assumption in Govans. He also served as an administrator of the Monsignor O’Dwyer Retreat House in Sparks.

Monsignor Valenzano, a former member of the board of directors for what is now Catholic Review Media, first fell ill while on a six-month sabbatical in Italy in 2006. He spent 40 days and 40 nights in Gemelli Hospital in Rome before receiving a bone-marrow transplant from his younger brother, Francis Valenzano, at The Johns Hopkins Hospital in Baltimore.

In a 2013 interview with the Catholic Review, Monsignor Valenzano said he viewed his health struggles as a kind of blessing.

Monsignor Thomas Tewes, a retired priest who was pastor of St. Mary in Govans  when Monsignor Valenzano was stationed there as a young associate pastor, said his friend suffered much pain, but remained spiritually grounded. He ministered to others receiving cancer treatment in the hospital and was an inspiration to the doctors and nurses at Johns Hopkins. Monsignor Valenzano also ministered to those who tended to him while in hospice care at the basilica at the end of his life.

“Despite the pain, you never would have known he was sick,” said Monsignor Tewes, one of Monsignor Valenzano’s closest friends and the man who will give the homily at his friend’s funeral Mass.

“His personality never changed,” said Monsignor Tewes, who often golfed and vacationed with Monsignor Valenzano. “He was always smiling, always jovial, always concerned about others.”

Monsignor Tewes noted that Monsignor Valenzano never spoke negatively about anyone and “was always complimenting priests for the positive things they were doing.”

“He was a fantastic priest,” Monsignor Tewes said. “He was the greatest friend of a lifetime.”

Archbishop Lori called it a blessing that he was able to spend time with Monsignor Valenzano in the last weeks of his life. The two often prayed together and Archbishop Lori celebrated Mass by his friend’s bedside.

“We shouldn’t sugarcoat how difficult was his road,” Archbishop Lori said. “It was a beautiful thing to offer Mass with him and pray with him and talk about the things that really mattered. He was an extraordinary man.”

George Matysek offers a personal reflection here about his family’s special connection with Monsignor Valenzano, a concelebrant at Matysek’s wedding and a spiritual mentor after Matysek’s son was stillborn in 2013 and following  the birth of his daughter in 2014.

This story was updated Sept. 6 at 4 p.m. to include funeral arrangements.