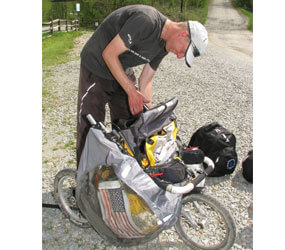 SMITHTON, Pa. – Jeff Grabosky dipped his hands in the Pacific Ocean Jan. 20 then started running toward the East Coast where in late May, he plans to jump into the Atlantic Ocean.

His route took him through the Southwest, Midwest and the Northeast through Ohio and Pennsylvania. Then in early May, his 3,700-mile solo journey was stalled in Virginia while he waited for his injured legs to heal.

The whole time, he prayed.

Grabosky, 28, carries a rosary ring and prays for people he knows and people he never met.

“If it weren’t for prayer, I wouldn’t be here,” he said in an interview as he passed through Smithton. “I am running to encourage people to pray and to put their trust in God. It’s amazing what we can do with our lives if we do.”

He was managing a runners’ sports store in Virginia last year when he began planning a cross-country journey that started in Oceanside, Calif., and will end in Smith Point, N.Y., tentatively May 25. As of midday May 16, he was in Englishtown, N.J., in the eastern central part of the state.

Grabosky grew up in New Jersey and graduated from the University of Notre Dame in Indiana, double-majoring in business and theology. His 50-year-old mother, Valerie, died of cancer in 2006, and his wife left him that same week.

“You think you are living a good life and all of a sudden you find yourself very lost,” he said. “Prayer was the only thing I had to turn to, and that’s how I went on with my life. I continued to pray for direction. I never gave up. I never thought that God didn’t care. I have always believed that God has a plan and I stayed true to him.”

As a youngster, Grabosky ran with his mother, who prayed the rosary as she ran. He was in track and cross-country running in middle school, high school and college, and later entered organized runs. His lung collapsed on the morning of a 10-mile event in Annapolis, Md., and part of it had to be removed. He recovered and went on to other runs, including two 100-mile ultra-marathons.

“I believe strongly in God and in the power of prayer,” he said. “I wanted to use this run to deepen my own personal prayer life and hopefully to help others strengthen theirs, whether or not they have the same beliefs.”

Through his website about his run, he takes prayer requests from around the world.

“Everyone seems to be concerned about the well-being of others and wants prayers for parents, spouses, children and friends who are ill or going through tough times,” he said. “I think this shows how much people need prayer in their lives, and how much they care about each other. It’s humbling for me to get their requests.”

Grabosky packs his gear in a baby jogger, a type of stroller with three inflatable wheels. He sleeps in motels, camps out when there are no nearby towns, and stays with family, friends and others who host him along the way. Depending on the weather and terrain, he runs 20 to 50 miles a day, and was able to run 60 miles a day on nine days.

He ran when it was 11 degrees, struggled through a powerful dust storm and encountered a mountain lion and other challenges along the way. In the White Mountains of Arizona, he navigated switchback roads that ascended and descended an 8,100-foot elevation.

“I think that finishing this run is going to be the beginning because I have learned so much,” Grabosky said. “I don’t know what I’m going to be doing or where I’m going, but life is going to start anew. Whatever it is, I will have a renewed spirit to helping those around me.”