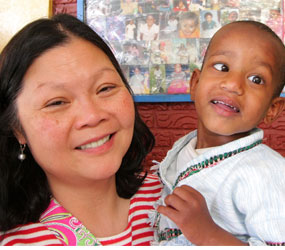 Baltimore-based Catholic Relief Services announced June 24 that its Board of Directors has named Dr. Carolyn Y. Woo, a former member of the CRS Board, to serve as the agency’s president and CEO. Woo will succeed Ken Hackett, who is retiring after leading CRS for the past 18 years.

Woo, 57, has served as the dean of the Mendoza College of Business at the University of Notre Dame since 1997, according to a news release from CRS. She served on the CRS Board of Directors from 2004 until 2010. On Jan. 1, she will become the seventh chief executive of CRS since it was founded in 1943.

“Dr. Woo is a woman of deep faith with a strong commitment to the mission of the Church. She will bring exceptional abilities and gifts to the task of serving the poor around the world in the name of Catholics throughout the United States,” said the Most Rev. Gerald F. Kicanas, Bishop of Tucson and Chairman of the CRS Board of Directors.

“CRS is so blessed to have had Ken Hackett’s leadership these 18 years, now to be followed by another outstanding faith-filled leader in Dr. Woo,” he said, in the news release.

Hackett, a parishioner of the Cathedral of Mary Our Queen who is retiring after leading CRS since 1993, worked closely with Woo during her tenure as one of the first lay members of the CRS Board.

“Having travelled and worked closely with Carolyn as a Board member, I have always appreciated her keen sense of the critical issues and decisions that faced us institutionally,” he said. “Her powerful intellect and insight combined with a profound faith and an abiding compassion will equip her well to lead CRS as it faces the challenges ahead.”

According to the CRS news release, Woo was born and raised in Hong Kong, educated by the Maryknoll Sisters of Ossining, and immigrated to the United States to attend college at Purdue University, where she received her B.S., M.S.I.A. and Ph.D. degrees.

Prior to assuming the deanship of the Mendoza College of Business at the University of Notre Dame, Woo served as Associate Executive Vice President for Academic Affairs at Purdue University. She joined Purdue as assistant professor in 1981, became full professor in 1991 and directed the Professional Master’s Programs in the Krannert School of Management from 1993 to 1995.

Her teaching and research interests include corporate and competitive strategy, entrepreneurship, management of innovation and change, and organizational systems.

During her six-year tenure on the CRS Board, according to the news release, she made several trips overseas to visit the agency’s programs and staff, including Banda Aceh, Indonesia shortly after the Indian Ocean tsunami, Afghanistan, Pakistan, Ethiopia and Kenya.

“I am honored to join an organization that is a true manifestation of the compassion of Jesus Christ and the Church’s ministry of charity around the world,” Woo said. “I look forward to building on the strong accomplishments of Ken and the global staff of CRS.”

Woo and her husband, David Bartkus, currently live in South Bend, Ind. They have two sons.