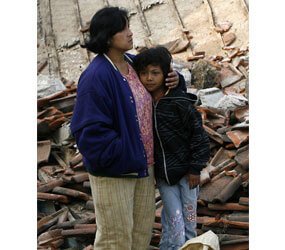 TASIKMALAYA, Indonesia – A Catholic parish in the predominantly Muslim Indonesian province of West Java is working to provide emergency aid to victims of the magnitude 7 earthquake that struck Sept. 2.

Humanitarian aid is not being adequately distributed to victims “so we must help the people” who have not been reached, Father Albertus Nugroho, a priest at Sacred Heart of Jesus Parish in Tasikmalaya, told the Asian church news agency UCA News.

Parish leaders, representatives of the Indonesian bishops’ charitable agency and a representative of the Muslim Students Movement in West Java met Sept. 3 and agreed first to provide emergency aid, then to work on rehabilitation and reconstruction.

Parish leaders said they were told other parishes and the U.S. bishops’ Catholic Relief Services would send them aid to distribute.

In a statement released from CRS headquarters in Baltimore, Yenni Suryani, senior representative for CRS in Indonesia, said staffers found “widespread devastation in the worst-hit villages” and that many Muslims were fasting during the Islamic holy month of Ramadan while living in tents.

“Men had to stand guard during the night to protect their families and watch over possessions,” Suryani said.

Frederikus Sundoko of the Indonesian bishops’ charitable agency, Karina, said the most important need in the area was food for a predawn meal and for breaking the fast after sundown during Ramadan.

According to the country’s National Disaster Management Agency’s Web site, the quake killed at least 59 people and damaged more than 10,000 houses. More than 25,000 people were displaced from their homes.