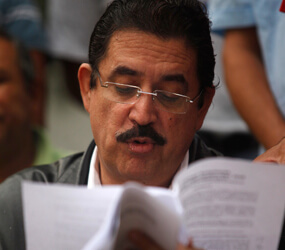 “There is no doubt that the agreement has brought peace to many Hondurans,” Auxiliary Bishop Juan Pineda Fasquelle of Tegucigalpa, Honduras, said in an e-mail to Catholic News Service Nov. 2. “Everything suggests that the path to electing a new president is much clearer.”

But the social tensions highlighted by the political dispute are far from resolved, said Bishop Pineda, who, along with Cardinal Oscar Rodriguez Maradiaga, was among religious leaders working behind the scenes to try to mediate the situation.

What is needed now is a focused effort at bringing social justice to the countryside, he said, adding, “Without it, there will be no social peace.”

Father German Calix, president of Caritas Honduras, the church’s charitable aid agency, called the Oct. 30 agreement “a big step forward for the country. It relieves much of the political pressure that we had been experiencing.”

His comments were echoed by Father Efrain Romero, director of Caritas in the Diocese of Santa Rosa de Copan, where many church leaders had been outspoken in their opposition to the coup.

The agreement “was long overdue, but we’re now able to have a dialogue on how to emerge from this political crisis,” he said.

The two Caritas representatives spoke to Catholic News Service by telephone Oct. 30 after political parties reached the agreement that seemed to promise to end the four-month crisis that had produced allegations of human rights violations and repression and had battered the national economy.

It restores Zelaya to office, pending a vote in Congress and a nonbinding opinion from the Supreme Court. The agreement also establishes a power-sharing government, transfers control of the military to the top electoral tribunal and allows for the full recognition of presidential elections scheduled for Nov. 29. It discards any amnesties for political crimes and forbids the possible convening of a convention to rewrite the Honduran Constitution.

Negotiators for interim President Roberto Micheletti and Zelaya reached the agreement after weeks of talks mediated by regional political leaders and by envoys from within Honduras’ religious and political leadership. Neither Zelaya nor Micheletti can run for president this time.

Zelaya had attempted to convene a consultation on reforming the constitution so that re-election would be permitted. He was accused of seeking his own re-election, which violates the constitution, a charge he denies. The Supreme Court declared the initiative illegal, an indictment and arrest warrant were drawn up and Zelaya was whisked out of the country. He returned to Honduras Sept. 21 and remained holed up in the Brazilian Embassy as of Nov. 3.

Many countries refused to recognize the interim government, and development aid from the international agencies, the United States and Latin American countries such as Venezuela had been cut.

Juan Sheenan, country director for Catholic Relief Services in Honduras, said the U.S. bishops’ international relief and development agency had $750,000 in funding frozen after the coup.

No timetable has been outlined for Congress to make its decision or the Supreme Court to issue an opinion on Zelaya’s return to power.

Mauricio Diaz of the Honduras Social Forum on Foreign Debt and Development said Zelaya only counted on firm support from 20 to 30 lawmakers in Congress.

He said the agreement “marks a return to institutional order … and international recognition.”

It also makes the Nov. 29 elections possible. The interim government had promoted the elections as an exit to the political crisis, but no country in the hemisphere had committed to recognizing the outcome.

Auxiliary Bishop Darwin Andino Ramirez of Tegucigalpa told CNS, “The elections should help to somewhat reduce tensions,” but he recognized that the political crisis had left deep divisions in Honduran society and the Catholic Church.

“Our society is polarized,” he said. “Within the church we have members that have formed bands that strongly support (different sides).”

Caritas Honduras is organizing a program for promoting reconciliation between Catholics.

“One of our great tasks will be to find reconciliation,” Bishop Andino said.