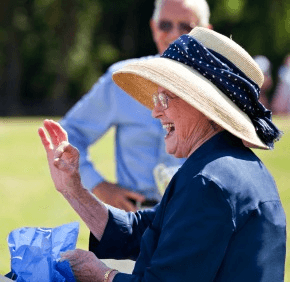 By Maria Wiering
mwiering@CatholicReview.org
Mary Agnes Lewis, a Howard County Catholic known for contributions to Catholic Charities, was named Eagle Scout Mom of the Year May 1 by the Baltimore Area Council, Boy Scouts of America.
Lewis, 85, is the mother of 10; all seven of her boys were Eagle Scouts.
“It’s just swept me off my feet,” she said of the honor.
Lewis’ husband, equine veterinarian Dr. Fred Lewis, is also an Eagle Scout, and she and their three daughters participated in Girl Scouts, she said.
Her sons, now ages 42 to 62, were members of Troop No. 737 in Ellicott City. She attributes her sons’ tenacity and perseverance to lessons learned while scouting.
“It takes a lot for the young men to go through the scouting program,” she said. “It really prepared our boys well.”
Lewis was honored at the second annual Eagle Scout Moms Thank You Reception, held at Towson University’s SECU Arena. According to a statement from organizers, the event “recognizes the important role that mothers play on a scout’s journey to earning the highest and most prestigious rank of Eagle before the age of 18.”
A former teacher, Lewis was presented her award by “Eagle Mom” Peggy Rowe, mother of Mike Rowe, a Baltimorean known for the Discovery Channel television show “Dirty Jobs.”
All 10 of the Lewis children attended the event.
“Mom certainly deserves it,” Dr. Rick Lewis, the oldest son and Baltimore veterinarian, said of the award. “She’s been a great example to us. She’s always doing something for others.”
The Lewises are parishioners of St. Louis, Clarksville, who also attend Mass at the Shrine of St. Anthony in Ellicott City. The couple hosts the annual Ten Oaks Polo Match at their family farm to help raise funds for Catholic Charities’ Our Daily Bread, a Baltimore soup kitchen. They have raised more than $250,000.
Also see:
Polo players team up with Catholic Charities
Mount de Sales grad says bone marrow donation strengthened faith
Ignatian volunteers find community in serving the poor
PrevNext