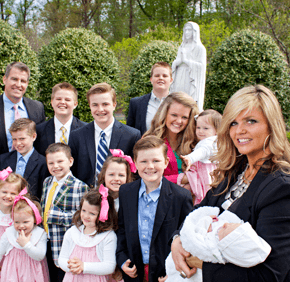 By Maria Wiering
mwiering@CatholicReview.org
ANNAPOLIS – When Eileen Berzins was 5, a reporter from a southern California newspaper asked what she wanted to be when she grew up.
Her answer: A mom.
“It’s all I ever wanted to be,” she said.
Eileen has realized her dream – 13 times. The youngest, Francis, was born April 25.
The 39-year-old jokes that in her line of work, a baby means a promotion.
Swaddled in a yellow blanket, the newborn slept peacefully in an infant seat as three of his sisters, all under 5 and in matching dresses, played nearby. One showed her mom a picture she drew, and another grabbed a brush to comb Eileen’s hair. Her older children were at St. Mary’s School, where they’re active in extracurricular activities from lacrosse to theater.
People ask how she runs a household of 15, with six girls and seven boys, ages 16 and younger.
“I do the same as everybody else does, just a little bit more of it,” she said. “It’s not like God gave us 13 at once.”
Eileen wakes up early and does a load of laundry before the rest of her family is out of bed. Older children help younger children get ready, and Eileen drives them to St. Mary in their 15-passenger van. Reciting a decade of the rosary keeps them from bickering in the car.
After school, the kids have a snack and do sports and homework. Whoever is home for dinner eats together. In the evening, Eileen does as much preparation as possible for the following day, her key to an organized household.
“When people say, ‘Does your wife work?’ I kind of laugh because there’s no tougher job,” said her husband, Tim, 41, who works in defense contracting.

Eileen shares her first name with her mother, Eileen Shanley, who described her daughter as a hard worker. Parishioners of St. Mary, the Shanleys live nearby, and Eileen Berzins’ father, retired Navy captain John Shanley Jr., often runs errands for them. Mrs. Shanley is a regular babysitter. With 13 kids, someone has an appointment somewhere almost every day.
Eileen was the second youngest of seven Shanley children. Her dad’s Navy career brought them to Annapolis, where she attended St. Mary’s School. All five of her brothers graduated from the Naval Academy, like their father.
Eileen earned a degree in history from Georgetown University in Washington, D.C., and a master’s degree in education from Loyola University Maryland in Baltimore. She married Tim, a Naval Academy graduate, in 1997.
Her mother had taught at St. Mary’s School, and the daughter thought the career fit nicely with motherhood. She taught at a local public high school until she had her first child, 16-year-old Moira, and hopes to return to the profession one day.
Moira soon had siblings: Timothy Jr., whom they call “Timber,” 15; Gerard, 13; William, 12; Sean, 10; Gabriel, 9; Kevin, 8; Mary Eileen, or “M.E.,” 6; Marie, 5; Molly, 4; Theresa, 3, Megan, 17 months; and Francis.
Moira called her mother “a really good mom” who gives each child individual attention.
The two have a close relationship; Moira teases that she’ll have more kids than her mom, though she wants to adopt, too. She admires her mom’s “chill” composure and the Catholic faith she’s instilled in her family, active St. Mary’s parishioners.
“I feel like everything we do has something to do with God,” Moira said.
Eileen keeps icons of the Sacred Heart and the Virgin Mary in her kitchen and has a devotion to Our Lady of Perpetual Help. She prays the rosary while working out and has named all of their children after saints. Francis is a nod to the current pope, as well as way of honoring St. Francis of Assisi and Blessed Francis Xavier Seelos, a Redemptorist priest who ministered at St. Mary’s in 1862.
“I want someone to walk into our house and know we’re Catholic,” she said.
That Catholic faith also inspired the Berzinses to be open to having a large family, Eileen added.
“Our life is our children, and we get so much joy out if it.”