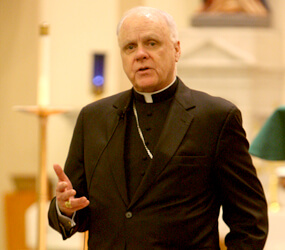 The numbers are staggering.

Although Catholic military chaplains minister to more than 1.5 million Catholics around the world, there are only 280 priests in the chaplaincy.

Whether on the battlefields of Iraq and Afghanistan or in hospitals and military bases around the globe, Catholic military chaplains provide spiritual support to active-duty and reserve military personnel, National Guard members and their families. They also are responsible for the spiritual care of Catholic U.S. government workers and patients in Veterans Affairs hospitals.

The limited number of Catholic chaplains makes it difficult to meet the sacramental demands of a U.S. military that is more than 25 percent Catholic. Grunts in the field can sometimes go as long as a month before being able to see a priest for Mass or confession.

“The special role of the chaplain is to remind everyone that all are children of God and they have a basic right to human dignity,” said Archbishop O’Brien, a former Army chaplain who served in Vietnam with the 173rd Airborne Brigade, 1st Calvary Brigade.

Before being named the 15th archbishop of Baltimore in 2007, Archbishop O’Brien was the archbishop for the U.S. Military Services for a decade. He traveled around the world visiting U.S. military facilities.

“We are far better prepared for whatever comes across our plate,” said Archbishop O’Brien said, noting that Catholic chaplains also have a responsibility to minister to military personnel of other faiths when called to do so. “Our priests have answers to questions others aren’t prepared to give.”

As an example, the archbishop said Catholic chaplains are sometimes called to address topics as fundamental as the morality of war. Catholic theology provides a strong system of just war theory, he said, that recognizes the right to self defense. Archbishop O’Brien cited the story of the Good Samaritan who aided a stranger attacked by thieves.

“What would have happened if the Good Samaritan arrived a half hour earlier on the scene?” Archbishop O’Brien asked. “Would he have let the man be pummeled to death or did he have a right to intervene to the extent necessary to save the man’s life?”

Catholic chaplains have an obligation to report infractions against human dignity and to work to help men and women live according to their consciences, Archbishop O’Brien said. He pointed out that there were no chaplains on duty at Abu Ghraib, a prison in Iraq where U.S. soldiers were convicted of mistreating detainees.

The archbishop said “the story is not being told” about how detainees at the Guantanamo Bay detention camp in Cuba are being treated with tremendous respect.

“We do recognize their human rights,” he said, noting that great care is taken to be respectful of the Islamic faith and the treatment of the Quran at Guantanamo. Prisoners are also receiving top-notch medical care, he said.

Asked why there are not more Catholic military chaplains, the archbishop said, “we’re not praying for vocations.”

“We’re not as preoccupied as we should be,” he said. “We have to talk it up in our communities.”