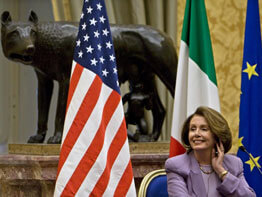 VATICAN CITY – Pope Benedict XVI met privately with U.S. Rep. Nancy Pelosi, speaker of the House of Representatives, and told her that all Catholics, especially those who are lawmakers, must work to protect human life at every stage.

Speaker Pelosi, a Catholic Democrat from California, has been criticized by many Catholics for her support for keeping abortion legal.

“His Holiness took the opportunity to speak of the requirements of the natural moral law and the church’s consistent teaching on the dignity of human life from conception to natural death,” the Vatican said in a statement about the Feb. 18 meeting.

Natural law and the church’s own teaching require “all Catholics, and especially legislators, jurists and those responsible for the common good of society, to work in cooperation with all men and women of good will in creating a just system of laws capable of protecting human life at all stages of its development,” the statement said.

Speaker Pelosi was making an official visit to Italy to meet members of the U.S. military stationed in the country and to discuss common security concerns with Italian government leaders.

Her 15-minute meeting with Pope Benedict took place in a small room in the Vatican audience hall after the pope’s weekly general audience.

In a statement released by her staff, Speaker Pelosi said, “In our conversation, I had the opportunity to praise the church’s leadership in fighting poverty, hunger and global warming, as well as the Holy Father’s dedication to religious freedom and his upcoming trip and message to Israel.” The papal trip is scheduled for the second week of May.

Speaker Pelosi also said, “I was proud to show His Holiness a photograph” from a papal audience she had with her parents in the 1950s, “as well as a recent picture of our children and grandchildren.” Speaker Pelosi’s husband, Paul, accompanied her to the meeting with the pope.

The speaker has made no secret of her belief that while efforts are needed to reduce the number of abortions in the United States and to help women faced with problem pregnancies, she believes abortion must remain safe and legal.

Coinciding with the 2009 March for Life in Washington, Speaker Pelosi issued a statement Jan. 22 saying, “I will work with President Obama, as I have worked throughout my entire career, to ensure a woman’s right to choose.

“Decisions about whether to have a child do not and should not rest with the government. We believe a woman – in consultation with her family, her physician and her faith – is best qualified to make that decision,” Speaker Pelosi said.

As a publicly practicing Catholic and a public opponent of efforts to make abortion illegal, Speaker Pelosi has come under sharp criticism by some bishops and other Catholics who believe that a politician who supports legalized abortion should not be allowed to receive Communion.

Other bishops, including Speaker Pelosi’s own Archbishop George H. Niederauer of San Francisco, have recognized the public service of such politicians and have opted to engage them in a dialogue on promoting respect for human life in a wide range of public policies.

But Speaker Pelosi angered many bishops and other Catholics in August when she told the television program “Meet the Press” that church leaders for centuries had not been able to agree on when life begins.

“I don’t think anybody can tell you when life begins, human life begins. As I say, the Catholic Church for centuries has been discussing this,” she said.

The chairmen of the U.S. bishops’ pro-life and doctrine committees criticized Speaker Pelosi, saying she “misrepresented the history and nature of the authentic teaching of the Catholic Church on abortion” in the interview.

Cardinal Justin Rigali of Philadelphia and Bishop William E. Lori of Bridgeport, Conn., said the church since the first century “has affirmed the moral evil of every abortion.”

“The teaching has not changed and remains unchangeable,” their statement said. “Direct abortion, that is to say, abortion willed either as an end or a means, is gravely contrary to the moral law.”

In an April teleconference with Catholic News Service and other media representatives, Speaker Pelosi said, “I have a sort of serenity” about receiving Communion even though her position on abortion differs from the church’s.

“The church sees it another way, and I respect that,” she said, adding, however, that she hoped the U.S. bishops would not use the refusal of holy Communion as a way of punishing Catholic politicians who don’t heed church teachings on abortion.

“Think of that word Communion, that which brings us all together as Christians, as Catholics,” Speaker Pelosi said. Denying a Catholic the Eucharist “would be something that would shatter that union,” she said.