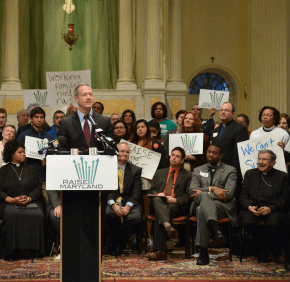 By Maria Wiering
mwiering@CatholicReview.org
Auxiliary Bishop Denis J. Madden of Baltimore and Catholic Charities of Baltimore Executive Director William J. McCarthy joined more than 30 Maryland officials, anti-poverty advocates and religious leaders Feb. 3 to support an increase in the state’s minimum wage.
“In gathering as a faith community today, we speak on behalf of all those who come to us for food, clothing and shelter,” Bishop Madden said. “Even as we embrace them in their need, we join them in their struggle to secure financial independence through an honest day’s work. These workers deserve the comfort of knowing their hard work will enable them to provide the basic necessities for their families.”
Each year, Catholic Charities of Baltimore cares for 160,000 Marylanders, many of whom are in poverty.
“We must raise the minimum wage in order to restore hope and opportunity, and to brighten the beacon as so many of our neighbors begin and continue on their journey out of poverty,” McCarthy said.
Gov. Martin J. O’Malley and Baltimore Mayor Stephanie Rawlings-Blake also spoke at the press conference, which was held at St. Vincent de Paul Catholic Church in Baltimore.
O’Malley introduced legislation (SB 331/HB 295) in the Maryland General Assembly to raise the state’s minimum hourly wage from $7.25 to $10.10 by 2016. His proposal would index the wage to the cost of living and improve the rate for tipped workers, increasing their pay from 50 to 70 percent of the minimum wage.
“A strong middle class isn’t a consequence of growth and prosperity; it’s the source of growth and prosperity,” O’Malley said. “As our economy gets stronger, it’s critical that we expand opportunity for hardworking families who play by the rules.”
According to the governor, raising the minimum wage would increase pay for 300,000 Marylanders and boost the state’s economy.
The press conference was organized by Raise Maryland, a nonprofit dedicated to increasing the minimum wage.
Maryland’s Catholic Bishops also called for an increase in the state’s minimum wage in a Jan. 20 statement “The Dignity of Work.”
“A full-time worker earning the state’s current minimum wage of $7.25 earns little more than $15,000 annually, hardly enough to pay for food and rent, let alone support a family,” they stated. “More than 80 percent of the state’s low-wage earners are adults, and many are parents trying to provide the necessities of life for their children. They deserve the comfort of knowing that their hard work can provide the means they need to achieve economic stability for themselves and their families.”
The Maryland Catholic Conference, which advocates on behalf of the state’s bishops, had named raising the minimum wage among its top priorities for the current legislative session.
Also see:
Minimum wage too little to live on, bishops, workers say
Five takeaways from the bishops’ new statement on poverty
PrevNext