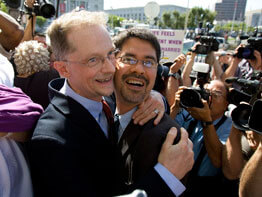 SAN FRANCISCO – Archbishop George H. Niederauer of San Francisco and other California Catholic leaders condemned the May 15 ruling by the California Supreme Court that struck down the state’s ban on same-sex marriage.

In a statement released shortly after the ruling, Archbishop Niederauer said Catholic teaching on marriage is clear and based on the teaching of Jesus Christ, who said God “made them male and female” and “for this reason a man shall leave his father and mother and be joined to his wife.”

“At a moment in our society when we need to reinforce the strength of marriage and family, this decision of the Supreme Court takes California in the opposite direction,” he said.

Several gay and lesbian couples joined the city of San Francisco and gay rights groups to sue the state government to overturn the ban on same-sex marriage.

The 4-3 ruling – which said that domestic partnerships currently recognized by the state are an inadequate substitute for marriage – would make California the second state after Massachusetts to allow same-sex couples to wed.

Opponents said they would fight the ruling; the court’s order was to become final in 30 days.

“This action challenges those in society who believe in the importance of the traditional understanding of marriage to deepen their witness to the unique and essential role that marriage between a man and a woman has in the life of society,” Archbishop Niederauer said.

Catholic groups and others are supporting efforts to put a measure on the Nov. 4 ballot to define marriage as between a man and a woman.

A leader of the gay rights group Equality California told The Associated Press that whatever happens in California it “will have a huge impact around the nation.”

Bill May, chairman of the Bay Area-based Catholics for the Common Good, told Catholic San Francisco, the archdiocesan newspaper, that protecting traditional marriage is a “matter of social justice.”

“We need clear laws supporting and promoting marriage,” Mr. May said. “Forty percent of children are born out of wedlock, and 34 percent are raised without contact with their fathers. Marriage has become a lifestyle choice that is disconnected from children.”

May said Catholics have an obligation to stand in opposition to laws and rulings that would deny children both a mother and a father.

“There is a definite public interest in protecting marriage,” May said. “I’m very disappointed the court overturned the will of the people and turned their backs on the common interest of every child in having a mother and a father.”

Mr. May said Catholics should work to generate public support for the proposed ballot measure to define traditional marriage.

Sponsors of that initiative submitted 1.1 million signatures, and are confident that out of that number they will have the required 694,354 signatures to qualify for the general election. The secretary of state is expected to rule whether enough signatures were gathered by the end of June. The initiative is similar to constitutional wording enacted by 26 other states.

Ned Dolejsi, executive director of the California Catholic Conference, said the court has overturned the will of the people.

“Proposition 22, which states, ‘Only marriage between one man and one woman is valid and recognized in California,’ passed eight years ago by a vote of 61.2 (percent) to 38.8 percent,” Mr. Dolejsi said in a statement.

“That statute reflected the wisdom of the voters of California in retaining the traditional definition of marriage as a biological reality and a societal good,” he said. “Unfortunately, today, the court saw fit to disregard the will of the majority of people of California.”

Dolejsi said Proposition 22 reflects Catholic teaching, while the May 15 ruling flies in the face of it.

“Catholic teaching maintains that marriage is a faithful, exclusive and lifelong union between one man and one woman joined in an intimate partnership of life and love – a union instituted by God for the mutual fulfillment of the husband and wife as well as for the procreation and education of children,” he said.

Connecticut, New Hampshire, New Jersey and Vermont allow civil unions, an arrangement that grants many of the rights of marriage to same-sex couples. Maine, Oregon, Washington and the District of Columbia allow domestic partnership, with rights varying by state. Hawaii allows for reciprocal beneficiary status, which is similar to domestic partnership.

San Francisco pushed the issue of same-sex marriage into the legal arena in 2004 when the city allowed same-sex couples to marry in spite of state laws forbidding the practice. The county clerk issued around 4,000 such marriage licenses under a directive from Mayor Gavin Newsom before the California Supreme Court halted the marriages.

The court later voided all the licenses. The May 15 ruling will not reinstate same-sex marriages nullified by the court in 2004, legal experts indicated.