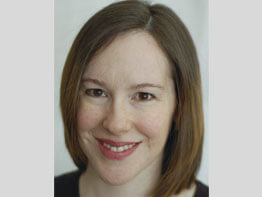 WASHINGTON – Catholic journalist Emilie M. Lemmons died Christmas Eve of complications of sarcoma cancer, but her blog and final column for The Catholic Spirit newspaper continued to inspire readers in the days following her death at the age of 40.

“Thank you for sharing your words of insight,” a reader of her last column wrote on the Web site of The Catholic Spirit, newspaper of the Archdiocese of St. Paul and Minneapolis, Dec. 27, three days after Lemmons died. “So, here, even after you are gone, you will continue to touch new lives.”

Mrs. Lemmons wrote in her monthly column for The Catholic Spirit and in her blog – Lemmondrops – about her struggles with terminal cancer, the guilt she felt about leaving her two young sons motherless, the resentment she felt about the prospect of dying at such a young age, and how she had endeavored to place the outcome of her life in the hands of God, so that she could live in the present and enjoy the time she had left with the people she loved.

Born in Portland, Ore., to Vincent and Nancy Ast, she earned a degree in English literature from Columbia University in New York, taught English for the Mississippi Teacher Corps and was a writer for the Delta Democrat Times in Greenville, Miss., before joining the staff of The Catholic Spirit Feb. 16, 1998, Norby said.

Shortly after Mrs. Lemmons’ son Daniel was born in August 2006, she decided to leave her full-time position at The Catholic Spirit, but continued to freelance for the newspaper and eventually began writing her monthly column, “Notes From a New Mom,” and her blog, said Joe Towalski, editor of The Catholic Spirit.

Past blog posts and columns reveal that Mrs. Lemmons was diagnosed with sarcoma – an aggressive form of cancer of the connective tissues – during her 2007 pregnancy with her second son, Benjamin. After his birth in March 2008 she learned from her doctors that, in her case, the illness was not curable through medication or surgery.

“More recently, Emilie wrote about her up-and-down struggles with cancer,” Mr. Towalski said in his tribute column. “She submitted her last column to The Catholic Spirit just a few weeks before she died – a reflection on searching for Advent joy from a 40-year-old woman facing stage 4 cancer that was getting worse.”

Mrs. Lemmons’ final column talks about how releasing her fate to God allowed her to live in peace.

“What if I trust that even if I die tomorrow or next month or next year things will somehow work out?” she pondered in her column. “What if I allow myself to put the outcome in God’s hands and just live intensely in the present, absorbing and embracing life as it happens? It’s not indifference or admitting defeat; it’s seeing the bigger picture.”

Hours after Mrs. Lemmons’ death, her husband Stephen posted the news on the Lemmondrops blog. A short time later readers began posting messages of sympathy. Most of the messages stated that her writing inspired them to embrace the joys of everyday life.

Mrs. Lemmons is survived by her husband and sons Daniel, 2 and a half, and Benjamin, 9 months, all of St. Paul; her parents, of Portland; sisters Mary Ast of Vancouver, Wash., Susanne Ast of Hood River, Ore., and Ellen Ast of Portland; and brothers Joseph and Stephen Ast of Portland.

The Lemmons family requests that donations be made to the Karen Wyckoff Rein in Sarcoma Foundation. More information about the foundation can be found online at www.reininsarcoma.org.