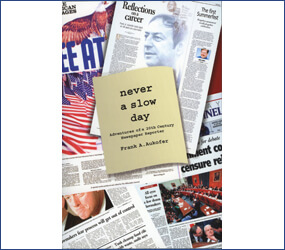 MILWAUKEE -–Frank Aukofer retired after 40 years with the Milwaukee Journal in 2000, but said he had so much fun as a newspaper reporter in the last half of the 20th century that he wanted to share the experiences.

A Marquette graduate and a parishioner of St. Anthony of Padua in Falls Church, Va., Aukofer, 74, covered events such as the civil rights movement and the assassination of the Rev. Martin Luther King Jr., always striving for accuracy and fairness.

“I think that if I made a contribution, it was that I always tried to be as down the middle and fair and accurate as possible,” he said. “I always thought that the real ideal for me as a reporter was to get the story right and to represent accurately the viewpoints or what the people that I was covering tried to do.”

Aukofer’s favorite time as a reporter was covering the civil rights beat from 1964 to 1969, an assignment that made his name in journalism.

“There was just no question that this was a movement that was right and long overdue,” he told the Catholic Herald, newspaper of the Milwaukee Archdiocese, while he was in town for a book signing at Marquette.

“You felt as if you were part of the movement, but you never had to compromise a journalistic principle,” he said, adding there were times “when it was really scary covering it,” but he knew it was “the best story going in the country.”

Today, Aukofer writes a weekly automobile column called “DriveWays” for Scripps Howard News Service; it goes to 400 papers each week. It requires a few hours of writing in exchange for free traveling in new vehicles and all-expenses-paid stays in five-star hotels.

The itch to write the news articles he did for 40 years has disappeared, but Aukofer still loves to write and knows his Catholic roots have had an impact on his life.

“I wouldn’t argue that my Catholic faith overtly guided anything I ever did, I mean, but I think that the principles that I learned over the years, just being a Catholic – of empathy toward others and no racism, and not judging people until you know who they are, looking at people as individuals and the whole love your neighbor thing – I guess. I think that all of that stuff must have had an influence on me,” he said.

Yet, Aukofer said he could not condemn their decision.

“As I say in the book, I’m not 100 percent convinced that the Catholics have got all the truth,” he said. “I suspect that we have pieces of it, whether you’re, again, Shinto, or whatever maybe even an atheist, maybe they have a piece of something, a piece of truth. … I’m convinced there is such a thing as an absolute truth in the universe, I just don’t know who’s got it. I suspect we all have pieces of it.”

But Aukofer made sure four of his grandchildren were baptized – he was discomforted knowing that born-again Christians don’t baptize babies. And he baptized them himself – even though they will not be raised Catholic.

According to the Catechism of the Catholic Church, any person, even someone not baptized, can baptize in the case of necessity.

“It was kind of a comfort to a grandfather, but I’m not sitting here telling you that I’m the greatest Catholic in the world, because I’m not,” said Aukofer, who has 10 grandchildren.

“I also realize that there are tons of other people out there with different kinds of religions and I think they all got a shot,” he said.

While Aukofer views his ability to separate his beliefs from his work as a Milwaukee Journal reporter as one of his biggest contributions, he also hopes that a few articles made statements.

He wrote about son Joseph and his wife, Joanne, who learned halfway through their first pregnancy that the baby was most likely going to be born deformed and have health problems. There was no question the baby would be born.

“I might disagree with the church on some things, but I don’t disagree on abortion, and I just think it’s horrible,” Aukofer said.

But the pregnancy ended in a miscarriage. After debating what to do, his son and daughter-in-law, who live in Georgia, decided to have a funeral for the child, he said. Baby A – so named because the baby’s sex could not be determined – was buried in Falls Church, where Aukofer and his wife and Joanne’s parents live.

In his article, Aukofer said, he explained the order of events celebrating the life of Baby A, from funeral procession to ceremony to burial.

“I was writing a straight story about what we did and it’s perfectly accurate,” he said. “It’s exactly what happened but in the back of my head, I thought, ‘This will be a very good anti-abortion statement.’“

“Never a Slow Day” ($37) can be ordered from Marquette University Press, www.marquette.edu/mupress.