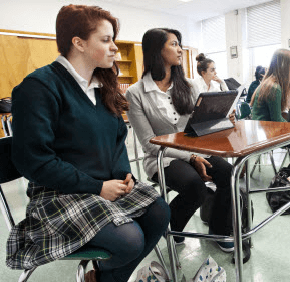 By Elizabeth Lowe
elowe@CatholicReview.org
Twitter: @ReviewLowe
Ashlee Punte and Magdalena Sobolewska live on different continents, but after exchanging emails, Facebook messages and then meeting, they discovered many commonalities.
“It’s like we’ve been friends for six years, not six days,” said Punte, 17, a senior at The Catholic High School of Baltimore. “She (Sobolewska) understands everything. I’ve only had to explain one or two things. We’re learning as much from (them) as they’re learning from us.”
Punte is one of seven Catholic High students hosting seven Austrian students March 8-18. Catholic High is one of five Catholic high schools in the Archdiocese of Baltimore hosting 42 students from Schulzentrum Friesgasse, a School Sisters of Notre Dame school in Vienna.
Calvert Hall College High School in Towson and the Institute of Notre Dame, Mercy High School and Archbishop Curley High School, all in Baltimore, are also hosting the students.
The Austrian students – all of whom speak fluent English – are paired with host families from one of the five schools and attend classes with their American hosts and hostesses. Sobolewska, 15, is living with Punte at her Joppatowne home and shadowing her at Catholic High.
During a recent theology class, Punte and Sobolewska discovered they’re learning similar material in their religion classes.
“They knew what we were talking about,” Punte said.
“It’s great here,” said Sobolewska, who added Catholic High is “bigger and wider” than her school building and classes are structured differently. “It’s not so strict as it is in Vienna.”
Sydnie Sparzak, a Catholic High senior, is hosting 16-year-old Evelin Illikka.
“It’s so fascinating,” said Sparzak, 17. “You can talk and compare things. I like hearing what her and her friends do.”
“It’s beautiful,” Illikka said. “We’re happy to be here.”
Barbara Nazelrod, president of Catholic High, said hosting foreign students is “a huge learning opportunity.”
“Nothing could replicate this experience except the real thing,” Nazelrod said. “It’s a reciprocal, life-changing opportunity.”
The trip is part of the Austrian school’s annual language trip to an English speaking country, said Christine Schneider-Heinz, a teacher and the international program coordinator at Schulzentrum Friesgasse.
“It creates such a positive trans-Atlantic relationship,” Schneider-Heinz said. “They’ve had this experience, which will stay with them for the rest of their lives.”
On March 18, the international students will head to New York City for a few days before returning to Austria.
Later this month, 13 IND students are expected to go on a reciprocal trip to Austria, Schneider-Heinz said. Last year, IND hosted 14 Austrian students. Additional host schools were needed this year because of the increase in the number of international students traveling abroad.
PrevNext