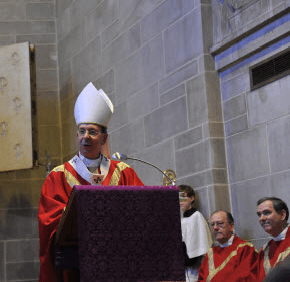 By Elizabeth Lowe
elowe@CatholicReview.org
Twitter: @ReviewLowe
Baltimore Archbishop William E. Lori celebrated a Mass at 5:30 p.m. March 13, welcoming the election of Cardinal Jorge Mario Bergoglio of Buenos Aires as the 266th pope.
The first Jesuit pope, Cardinal Bergoglio, 76, has selected the name Pope Francis.
Since 1998, the Latin American pope has been archbishop of Buenos Aires, where he is known for his kinship for the poor.
His election was announced in Latin from the balcony of St. Peter’s Basilica March 13 to a substantial crowd in the square below and millions watching around the globe after white smoke flowed from the Sistine Chapel chimney signaling the cardinals had chosen a successor to Pope Benedict XVI.
About 75 people attended the Mass at the Cathedral of Mary Our Queen, which was held in The Lady Chapel. The faithful filled the chapel.
At the beginning of Mass, Archbishop Lori said today we give thanks “for the election of Pope Francis the first, the election of our new Holy Father,” which received a booming of applause.
Concelebrants included Baltimore Auxiliary Bishops Denis J. Madden and Mitchell T. Rozanski; Monsignor Richard W. Woy, vicar general; Monsignor J. Bruce Jarboe, rector of the cathedral; Father Michael A. DeAscanis, vocations director for the archdiocese; and Paulist Father John Hurley, director of the archdiocese’s Department of Evangelization.
During his homily, Archbishop Lori said there are many firsts involved with the selection of Pope Francis.
“It is the first time a Jesuit has become our Holy Father, so I should imagine there is palpable joy tonight at Loyola University,” Archbishop Lori said in reference to the college, located just a few blocks south. “It’s the first time that somebody from the American continent has become our Holy Father. … We can truly claim this Holy Father as one of our own.”
He continued, “Our new Holy Father comes in line as the 265th successor of Peter coming before the world to bear witness to Christ, the son of the living God.”
Archbishop Lori described Pope Francis as a man of “strong faith,” “a lover of the poor” and “a person who understands the importance of living the authentic Christian life.”
Archbishop Lori called him “a pope who is very close to the people that he has served,” noting that he walks to work while Cardinal Bergoglio took the bus to work, which drew laughter from the faithful.
Archbishop Lori concluded his homily by asking the congregation to join him in praying the Hail Mary.
Annamarie Legaspi, a parishioner of Shrine of the Sacred Heart in Mount Washington, is particularly excited the new pope is a Jesuit.
Legaspi, a native of the Philippines, previously worked as an occupational therapist at a rehabilitation care facility with Jesuit priests in the Philippines.
“It’s great there’s a lot of firsts,” Legaspi said. “I’ve learned a lot from the Jesuits. I’m so happy.”
Stephen Engel, a parishioner of St. Louis in Clarksville, said “I’m just so excited.”
“I’ve heard it (the conclave) can be a while, but how wonderful it’s so quick,” Engel said. “What a wonderful candidate.”
Also see:
Archbishop Lori impressed with new pope’s concern for the poor
Argentina’s Cardinal Bergoglio elected pope
March 13, 2013 CatholicReview.org
PrevNext