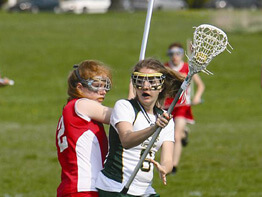 After a heartbreaking 11-10 overtime, sudden-victory loss in the 2006 IAAM C Conference lacrosse finals, The Catholic High School of Baltimore is on a mission to get back to the finals game and walk away with title honors this year.

The Cubs are undefeated on the season, 13-0 overall and 9-0 in conference play. They have systematically outscored their opponents this season by scoring 146 goals while holding their opponents to just 29.

“I knew we would have a great season this year, but I never thought we would be undefeated at this point,” said head coach Matt Bowen, who is in his second year with the team.

Bowen, an offensively-minded coach, has brought on Justden Gerhart as his assistant. Gerhart is heavily focused on the defensive-end and is working hard with his defensive players both in the goal and on the field.

The Cubs have waited a year to settle the score, keeping that experience in the back of their minds every game. “Our talent has increased but no one wants to see what happened last year, happen again this year,” said Bowen.

The team is focused, driven and yet having fun with a high-level of team camaraderie and good team chemistry, setting the stage for this stellar season.

On the offensive side, the Cubs are led by their top producer, sophomore center Olivia Baker. Not only is Baker leading the conference in scoring, she may also be in the top running for the entire league with more than 40 goals on the books. “Olivia never quits. She plays with a lot of heart and always digs down deep,” said Bowen.

In tandem with Baker is four-year varsity mainstay and team captain Stephanie Parker and sophomore Ali Terry. Parker, with her lightening speed, leads the team’s transition game. An unselfish player, Parker will always look for the open player if the shot is not there for her and is a key leader on the field. Terry, a sophomore, is both a feeder and a shooter, and possesses good vision of the entire field coupled with her savvy sense of the game.

On defense, senior captain Katie Amos is the field general and works closely with senior captain Stephanie Lawrence in the goal. “Stephanie is a very aggressive player in the goal,” said Bowen. “She has no problem stepping out of the crease.”

A nice surprise for the Cubs this season has been freshman Sara Thompson, an all-around athlete. “She’s nothing short of phenomenal,” said Bowen. Thompson is a starter who plays both offense and defense.

“Lacrosse is the kind of game where if you don’t quit, nine out of 10 times, you’ll come away with a victory,” said Bowen.