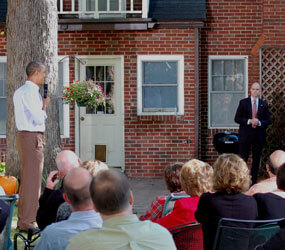 DES MOINES, Iowa – President Barack Obama chose the backyard of a Catholic Des Moines family Sept. 29 to talk about issues ranging from the economy and taxes to education, poverty and health care.

The president arrived at the home of Jeff and Sandy Hatfield Clubb and their two children in the tree-lined Beaverdale neighborhood about 10 a.m. and stayed for more than an hour. He spoke to a group of about 80 people, mostly friends of the Clubbs who sat in lawn chairs provided by neighbors.

Obama’s visit was part of a swing through four states.

The couple described themselves as a typical American family. Jeff, who had been a firefighter, is a social studies teacher at Holy Trinity Catholic School in Des Moines. Sandy is the athletic director of Drake University. Their two children attend Holy Trinity School.

Continuing the Holy Trinity theme, its pastor, Father Michael Amadeo, was the last of five people to ask a question during the forum.

The priest shared a story about a Holy Trinity family in which the 55-year-old father lost his manufacturing job more than a year ago. He asked what Obama’s economic policies could do to help people like his parishioner in the next year.

Obama said many manufacturing jobs will not return because factories are more efficient and require fewer workers, and some jobs are moving overseas where wages are cheaper. His advice is for the unemployed to keep up their skills so they’ll be ready when the economy becomes strong again. He singled out clean energy as a promising business for the future.

Regarding war, the president said he was focusing on “nation-building here” rather than overseas. He reminded the crowd that he was opposed to war in Iraq from the start and said while there is a plan for decreasing troop levels in Afghanistan, that country faces challenges because of its 70 percent illiteracy rate and no tradition of a strong central government.

On taxes, Obama touted tax cuts on income of less than $250,000 a year, a position opposed by another questioner in the audience who owns a small business.

The president was referring to extending tax cuts just for those who earn less than $250,000. Tax cuts for all income levels were passed in 2001 and 2003 during the Bush administration. The cuts are scheduled to expire Dec. 31 unless Congress takes action.

Democrats want to keep cuts in place for those who earn less than $250,000 a year and let those expire people who earn more; Republicans want to extend the cuts across the board.

Marti Anderson, who manages the crime victim assistance program for the Iowa Attorney General’s office, asked Obama how the increasing poverty rate could be lowered.

Figures released by the Census Bureau Sept. 16 showed that more Americans than ever were living in poverty in 2009; the figure rose to 43.6 million, or 14.3 percent of the population.

Obama said the long-term fix for poverty is to grow the economy and improve the education system.

After the gathering, Anderson said the president seemed to be down to earth but admitted she was nervous while talking with him.

“I thought, ‘Oh my gosh, I’m talking with the president of the United States,’ ” she told The Catholic Mirror, newspaper of the Des Moines Diocese.