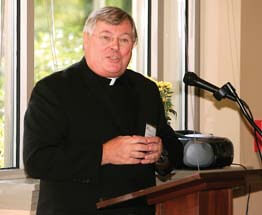 Archbishop Edwin F. O’Brien’s one-week anniversary as leader of the Archdiocese of Baltimore set off on a positive note Oct. 8, as the Catholic Family Foundation announced it was distributing $1 million for local Catholic endeavors, the largest contribution in its nine-year history.

Foundation leaders announced the milestone contribution during a luncheon at the parish center of the Cathedral of Mary Our Queen, Homeland, and said they looked forward to surpassing that amount in the future.

Spawned in the late 1990s from Cardinal William H. Keeler’s Heritage of Hope campaign, the public charity nonprofit organization now boasts nearly $23 million from 300 individual endowments, up from about $5 million and 30 endowments in 2004, said James Edwards, executive director of the organization.

The working interest from the $23 million in the foundation reserves provided the group’s $1 million distribution this year, he said.

Church of the Resurrection, Ellicott City, parishioner Gina Giaudelli Maclean said her family’s endowments are set up to help pay for seminarian formation, continuing education for priests and for clergy retirement.

These endeavors are very important to Ms. Maclean, who has a rich history of priests in her family serving the archdiocese.

“Our priests deserve no less,” she said.

Archbishop O’Brien agreed and asked the generous donors at the luncheon to encourage others to help the foundation build its treasury to ensure the archdiocese can continue helping not only the clergy, but also the poor and needy.

“We have a responsibility to fulfill the promise for the future,” he said. “We need to continue what we are doing today.”

“Now, we want to set a goal of distributing $5 million in a single year,” said James Stojack, vice chairman of its board of trustees and a parishioner of St. Ann, Hagerstown. “We exceeded $20 million in endowments sooner than we expected and we’ve set a goal to have $200 million in the next 10 to 20 years.”

Retired Philadelphia resident Francis Rasus has committed $159,200 in three endowments in the past two years and likes that he is able to direct his money toward the causes that are most dear to him.

The Our Lady of Ransom, Philadelphia, parishioner, set up three endowments with the foundation. One benefits Camp Glow for people with developmental disabilities, another provides aid for deaf ministry and the third helps fund the operations at Our Daily Bread soup kitchen and employment center in Baltimore.

“I love the foundation’s slogan, ‘Families of Faith Making a Forever Difference,’” he said. “The money continually works for the good causes and those of us donating get to see the difference it makes.”

Though Mr. Rasus said he enjoys the tax benefits from providing his endowments to the archdiocese, he said watching the money work for others – while he is still alive – makes the gift more pleasurable than leaving it in a will.